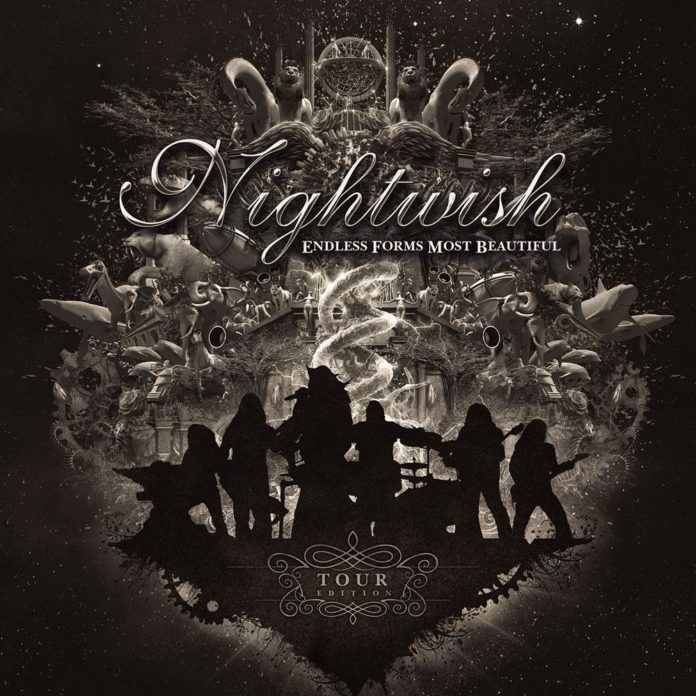 There is a “before” and an “after” Nightwish. Although they were not the first metal band fronted by a woman, nor were they the first ones to rely heavily on symphonic elements, they were certainly the ones who managed to bring that sound into the mainstream of heavy metal. Whether people like them or hate them (and there seems to be quite a bit of both) it is undeniable that they are a household name, and that they are sure to sell out virtually any venue they play at.

Their popularity, particularly in their native Finland, is such that they have even been the subject of a number of gossip stories in glossy magazines, and their line-up changes (as well as anything that those bloodsuckers can sell as “news”) are obsessively followed. Fans are also heavily invested in the band, and many of them develop a deep connection with their songs, and so they anxiously await anything coming from them.

This is the environment in which we find Endless Forms Most Beautiful, the band’s 8th studio album and, perhaps most importantly, the first one after the addition of Floor Jansen (vocals, ReVamp, ex-After Forever) and Troy Donockley (uillean pipes) as full members of the band.

As someone who listened to a lot of Nightwish for a number of years, I didn’t know what to expect from this album. For starters, even though for a long time I really enjoyed the operatic work that Tarja did during her stay in the band, I was actually growing quite bored of it. Even though I still think that albums like Wishmaster and Century Child are really amazing releases, and I will happily listen to them, I wasn’t really looking forward to an album that would just be a return to the Tarja years. Since Floor has the ability to pull off the soprano parts of the old Nightwish material (something that her predecessor simply wasn’t trained to do), I was expecting that, for better or worse, they would just go back in time and offer a new and improved Wishmaster. It wouldn’t be a bad album, I’m sure, but it definitely wouldn’t be what I was looking for.

It is to the credit of Tuomas, the main songwriter of the band, that instead of taking a step back, they took a massive leap of faith, and created something new, unexpected, and actually pretty damn good.

The album is simply full of what we have come to associate with Nightwish, particularly the symphonic, larger-than-life, style that Tuomas has been infusing (and increasing) in every new release. There is a clear passion for the cinematic, and the songs exude an epic and majestic sense that reminds me of the likes of Three Steps from Hell, as well as, of course, Hans Zimmer and, arguably Tuomas’ biggest influence, Danny Elfman.

The combination of the orchestras and choirs that participated in the recording, with the metal sound of the band, was done in a terrific way, and really enhances the final product, and does not come off as an unnecessary addition. Since nowadays many bands just add a string and brass section to their albums just because they can, it is nice to see a band that really knows how to do it.

Floor’s voice was used in a great way, and her abilities were pushed in different directions. While it must have been a very challenging endeavour, it definitely paid off. Her anger-filled shrieks in “Yours is an Empty Hope” (wonderfully coupled with those of Marco), and her fast-paced singing in epic 24-minute long “The Greatest Show on Earth,” contrast dramatically with her soft singing in “Élan” or “Our Decades in the Sun.” It is really a great performance.

Nothing in the album seems accidental, and you can tell that there was a careful attention to detail. Everything seems to be right where it belongs, and every addition seems deliberately planned. Take Donockley’s pipes, for example. They are not there just for the hell of it, they really add something to the music, and I can’t imagine this album working as well without them. Sure, you could play most of “My Walden” or “Élan” without them, but I really doubt you’d get the same result.

My only issue with the album, and this comes down strictly to personal preference, is that Marco’s voice was largely relegated to backing Floor’s vocals, and so we have nothing like Dark Passion Play’s “Bye, Bye Beautiful” or Once’s “Wish I had an Angel”. It’s a shame, since his voice is really interesting, and it has always been a great complement to Nightwish’s melodies. While the album is great as it is, I certainly would have liked to hear him more.

In addition to being the band’s 8th album, Endless Forms Most Beautiful seems to be Tuomas’ manifesto of discovering atheism. He is as subtle as an elephant on stilts, as demonstrated by his recruiting biologist (and author of The God Delusion) Richard Dawkins to narrate a few segments of the album, including a section from his book Unweaving the Rainbow, and which is a fairly straightforward atheist reflection (also, it isn’t Dawkins’ best reading of this section)­. While I personally don’t have a problem with Tuomas becoming an atheist, despite his past endeavours of a more Christian inclination, the lack of subtlety risks making him come off as preachy.

Endless Forms Most Beautiful is a terrific album, and I’m sure that it will become an important part of your collection. It is ambitious (including a 24-minute song that is mostly instrumental), varied and entertaining. It is, definitely, the next stage in Nightwish’s evolution.

The question is whether you are ready to evolve.

IN A NUTSHELL
A terrific album that only proves that Nightwish's place in the pantheon of metal is well deserved
A new take on Nightwish's sound
A varied use of Floor's range
An epic atmosphere.
Risks coming off (paradoxically) as preachy
Not Dawkins' best reading of his own book
Not nearly enough Marco
5