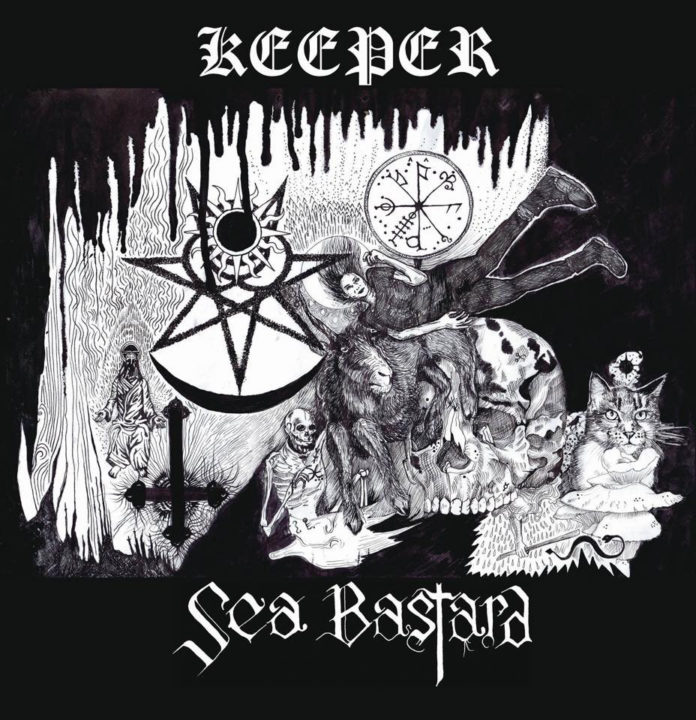 Over the years doom metal has become a genre that encompasses a wide variety of sounds. You need look no further than Candlemass and Electric Wizard to see what I mean. Much like death and black metal, doom comes in many forms, and the split between Keeper and Sea Bastard is an excellent example of this. Though both bands have more sonic common ground than Candlemass and Electric Wizard, they’re still two very different animals.

The first half of the split is dedicated to a monolithic track entitled “777,” by California’s Keeper. The droning (yet crushingly heavy) guitars remind me of noise-mongers SunnO))), particularly in terms of tone and pacing. Lurching and siren-like, the guitars create a nightmarish landscape with a slightly blackened tone, backed by shrieking vocals in the vein of Lord Mantis and Indian. There’s not much in the way of variation for the duration of the 14 minute track, but fans of this type of doom are preconditioned to ride it out anyway, and the riffs are heavy enough that all is forgiven, and time passes by pretty quickly.

On the flip side, UK’s Sea Bastard offer up a slab of heavy doom in the form of “Astral Rebirth,” clocking in at nearly 21 minutes! Much like Keeper, Sea Bastard have a repetitive, hypnotic riff that stretches out over the length of much of the song, but where Keeper delve into drone/black metal territory, Sea Bastard opt for a sludgy, crust-influenced doom sound, similar to Samothrace. Chord changes take a while to pan out, but when they do it is well worth the tense build up, and will have your head bobbing along. The vocals are a deeper death-growl style than those on the Keeper track, which serves to separate the two bands’ sound even further. Around 8 minutes in, the drums and vocals drop out, leaving the guitars to slug it out with a sound akin to Special Low-Frequency Version-era Earth, before picking up the pace with higher pitched shrieks and faster drums, complete with double bass.

This split is definitely in the running for being one of the heaviest doom releases of 2015. There’s just enough difference between the two bands to make this a diverse sounding record, despite only containing two songs, and listeners will no doubt want to delve in to the discography of each band.