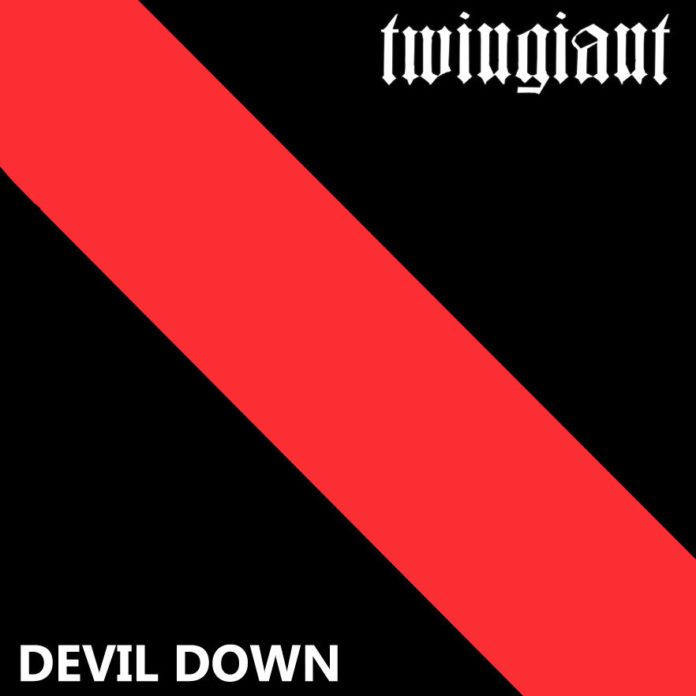 Thanks to bands like Fu Manchu and Queens Of The Stone Age acting as a gateway drug to stoner metal (pun totally intended), there are legions of bands devoted to the power of the riff. If you’ve got a Sunn or Orange amp, a guitar, and a handful of Black Sabbath-approved riffs, you too can start a heavy band! Therein lies the issue, however: while everybody CAN start a band, not everybody SHOULD, since this usually leads to over-saturation of the market, and a lot of mediocrity being forced down the throats of the listeners.

Stoner metal isn’t immune to this problem, and it is indeed experiencing what I consider to be an over-saturation, which causes me to get a bit leery when I see bands labeled “stoner.” That being said, I do get pleasantly surprised on occasion, and the latest release by Phoenix, Arizona’s Twingiant, Devil Down, is one such case.

The opening track, “Old Hag,” is a bit deceptive in its laid-back atmosphere; coming across as a desert rock piece that could easily be on any Brant Bjork release. Although the mood lulls the listener into a sense of serenity, be warned; massive riffs quickly follow, not even waiting for the first song to end before kicking you right in the teeth. Sure, there are plenty of twangy-sounding guitar bits scattered throughout Devil Down (check out the intro for “Under A Blood Moon”) and several Sabbath-like riffs (the title track, “Devil Down” is a great example), but Twingiant are no copycats. The vocals really stand out; they sound like an enraged Sasquatch, with vocalist/bassist Jarrod Leblanc managing to ride the line between guttural yells and gruff singing. Call it yelling in key, if you want, one thing it can definitely be labeled as is unique; the burliness of the vocals work in tandem with the often mammoth-sized riffs to create a crushingly heavy atmosphere.

While production can often be the weak point for many modern stoner records, that’s certainly not the case here. The tone is somewhat hazy, almost as if the songs are drifting in via smoke signals (pun also intended) but not so much that you lose clarity or power. While there’s plenty of low-end to go around, the guitars also have melodic riffs that lie somewhere between lead and rhythm, giving the songs an old-school metal vibe at times.

Devil Down is a thoroughly enjoyable record, and will certainly gain Twingiant some more fans and recognition.

Iron Maiden – Nights of the Dead: Legacy of the Beast...