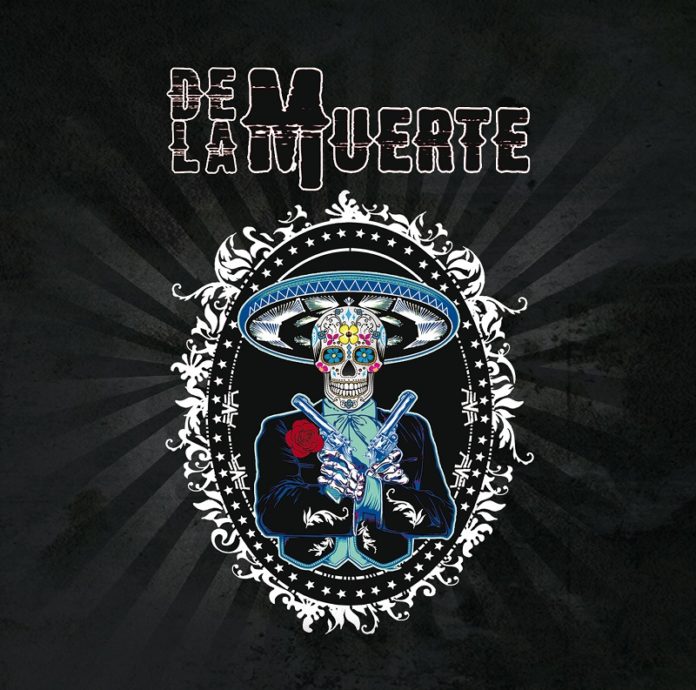 When I hear of an Italian band creating Southern hard rock inspired by a Mexican cult, my expectation for an exceedingly unusual listening experience increases tenfold. Such an odd combination of elements put into the blender of musical expression would normally result in an abnormality smoothie that may entertain, or frighten, or both. De La Muerte don’t blow the doors off the crazy barn; instead they provide a product with a couple of unique qualities and a handful of endlessly tried mechanics.

The most interesting aspect of De La Muerte are the vocals, which at times fall to an operatic baritone, and others imitate Todd La Torre of Queensryche in a rich, warbling high tone. Sprawling range aside, the vocalist also manages to wrap his tongue around some faster paced portions that create mildly catchy lexicons. The lyrics fully embrace the Southern/Western themes with songs that glamorize destructive gambling habits, six gun shoot outs, and the practices and morals of the day of the dead. Unfortunately, the vocals are the only element of the music that even acknowledges the Southern theme, as the instrumental seems to have a complete disregard for the direction and overarching ideas.

The instrumental part has a solid production value with all the layers mixing and building off each other within the individual songs, but not throughout the album. The lack of an overall direction makes each song sound very similar to one another, as they take the same twists and turns and wind down into conclusions that are so close to each other they may as well be twins. The sound is a bit like what you would get if you boiled down Volbeat’s music to the very core of its metal and threw in some Avenged Sevenfold drama-mongering antics.

Overall, the performance is very disappointing in the simplicity and short-sightedness of its presentation and execution. Everything seen in the instrumental, while not being inherently bad, has been done many times before and will be done again many more, as it is the go to example of generic metal.

De La Muerte begin with the promise of a concept that may not be incredibly original, but does at least have the potential for some intrigue and mischievous behaviour. The vocalist seems to be the only one to pick up the idea, run with it, and drive everything he’s got into it, leaving his bandmates in the dust to twiddle their thumbs and ask each other about the weather. While there is solid playing and energy present in the sound, there is a lack of originality that hampers the performance and keeps it from taking off the launch pad into new frontiers.

Theatrical and unique vocals with impressive range and diversity.
A potentially insane combination of elements.
The concepts and ideas suffer greatly from underdevelopment and are barely explored or realized resulting in a largely unremarkable sound.
3