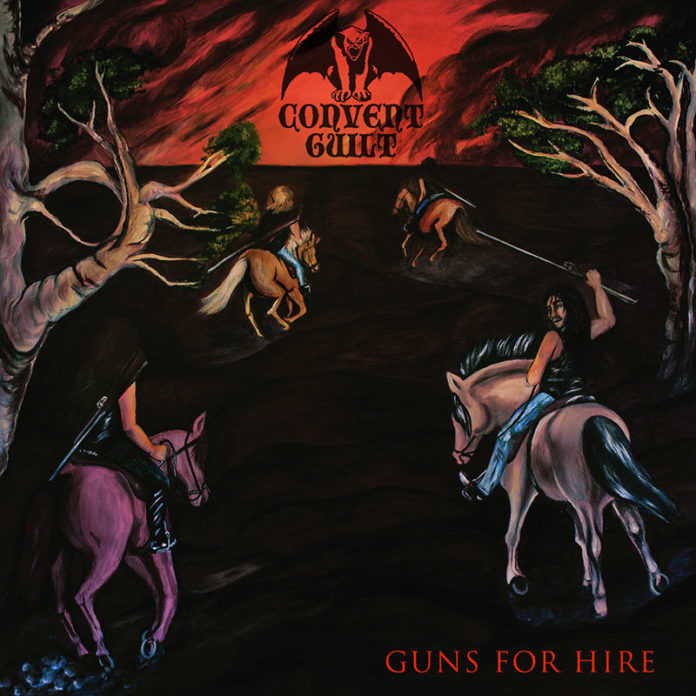 The worldwide resurgence in traditional heavy metal has been simply astonishing. It seems like new bands channeling the spirit of the NWOBHM keep popping up every week and I, for one, couldn’t be happier about it. Australia’s Convent Guilt are the latest entry into the fray and, while there are weak points to be found in their debut album Guns for Hire, there’s also a lot to be admired and appreciated.

While there’s not much in the album that’s especially unique or different, the album excels at invoking the general vibe and ethos of bands like Angel Witch, Soldier, and Traitor’s Gate. The earthy, rumbling guitar tone, the subtle but bouncing bass, the marching drum work, the foggy production; it’s all blatant worship for that by-gone era. Down to the songs themselves, it’s all stuff that you’ve heard before. It’s like a greatest hits compilation in which all the songs have been slightly re-written. Convent Guilt may not have found their own unique twist just yet, but they’ve got an incredibly solid base to work from.

The weakest part of the affair lies in vocalist Iron Belshaw. He is by no means a bad singer, evoking the same naive, youthful exuberance as his compatriots. However, he does at times fall in to this flat, toneless mid-voice that lacks depth or real excitement. This makes certain parts of the album take a dive in terms of its atmosphere. While I feel like this is the kind of problem that will be remedied with further experience, it nevertheless dampens what could have been a superb first album.

Convent Guilt’s debut shows a lot of potential. Despite its flaws it succeeds in being a more engrossing document than some of the more popular, major-label traditional metal documents that I’ve heard over the last few years. Check it out if you’re down for some excellent, if slightly derivative, old-school devilry.