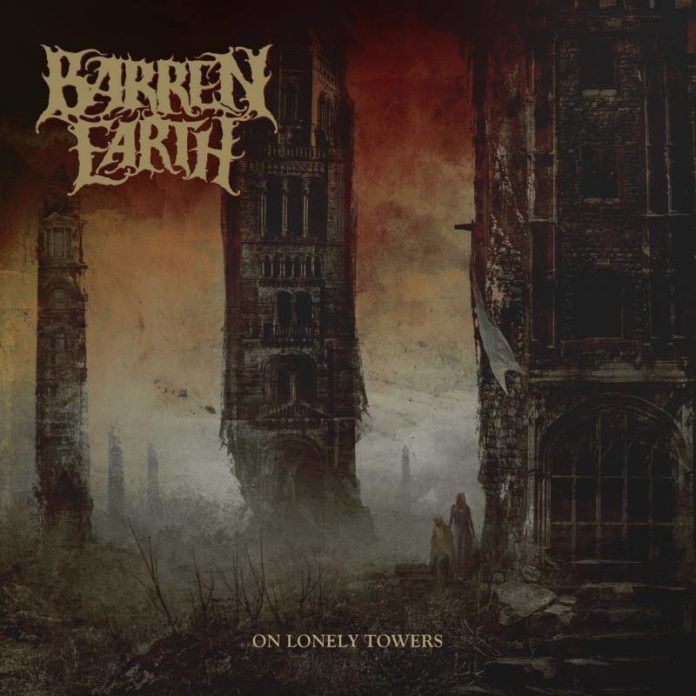 Several years ago I went to a Swallow The Sun gig, where I met vocalist Mikko Kotamäki. This was right around the time I started getting into doom metal, having mostly been a death and black metal fan up to this point; since I still wanted harsh vocals in my metal, I was really excited about how heavy (yet still extremely melodic) Swallow The Sun were. I told Mikko about this, and he told that if he was into melodic and progressive stuff, I’d love his other band, Barren Earth. Sure enough, I listened to their first full-length, Curse Of The Red River, obsessively. It had elements of Swallow The Sun, for sure, but there was a really diverse range of sounds, and I was completely hooked.

As much as I enjoyed Curse Of The Red River, I felt the follow-up, The Devil’s Resolve, was a bit disappointing, since even though it was decent, it seemed to be too much “prog-by-the-numbers”. This time around, however, fans of Barren Earth can rejoice, since On Lonely Towers shows a band rejuvenated, with fresh ideas, a greater sense of dynamics, and still bone-shatteringly heavy.

New vocalist Jón Aldará proves himself to be quite an asset, with clean vocals that soar high, and guttural death growls that seem to rumble from the very depths of the Earth. To match Jón’s range, the band provides a soundscape that is just as diverse, ranging from the melodic death metal opening riffs on “Howl,” the melancholy yet crushing doom of “A Shapeless Derelict,” to the progressive mid-section of “The Vault.” The shifts between sounds are handled with utmost precision; a prime example of this is “Set Alight,” which begins with some speedy guitar work, which quickly shifts to a mournful sounding keyboard passage, to then transition into a lurching melodic doom riff.

The keyboards on the album really bring out the progressive rock influences, very reminiscent of 70’s progressive gods of Yes and King Crimson, particularly on the jazzy section found midway through “Sirens Of Oblivion,” which even has a very prominent saxophone. While extreme metal fans may be left scratching their heads at the progressive/jazz sections,  fear not, there are still plenty of opportunities to bang your head. The band was careful not to overindulge in the experimentation, and so they make sure to keep things heavy.

The production does an excellent job of holding the material together, making the rapid transitions between styles seamless. There are sounds attacking your ears from every nook and cranny of each and every song, guaranteeing that you will listen to this album more than once. The sound levels allow you to hear each and every instrument and sound, without overpowering any of the other instruments. Riffs go on as long as they need to, never overstaying their welcome and, conversely, not leaving the listener wanting a section to stretch out a bit longer.

Barren Earth have once again established themselves as a dominant force in the progressive metal scene; doom, melodic death metal, and 1970’s progressive rock all mix quite evenly. The melancholy doom sections will delight fans of My Dying Bride and Swallow The Sun, and fans of the earlier years of Opeth will find plenty to enjoy here as well. The term “a little something for everybody” may be a bit overused, but in the case of On Lonely Towers it is completely accurate.