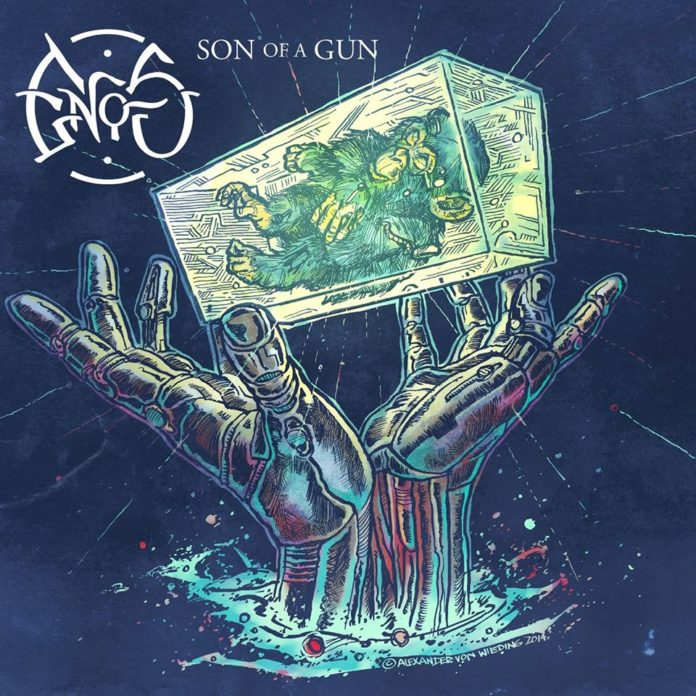 This seven inch splits kicks off with Enos’ “Son of a Gun”, a song that begins with a mounting percussion intro that builds and builds as the guitar slinks in like a fog with low and dirty riff work. The mix is done in such a way that it keeps the drums from being bogged down in the sludge of the guitar, allowing them to stay precise, focused, and far forward. A couple of classic “wah wahs” are thrown in for theatrics’ sake before the whole instrumental crashes in and kicks the sound into overdrive. As the vocals chime in, the sound cools down and lets singer Chris Rizzanski take the reins, leading the sound into a more mellow passage with Deep Purple keys overlaid in the background. Enos follows this formula throughout their song, swapping between heavier instrumental sections and portions more focused on the vocals (which are done very well and with creative and interesting lyrics). There are also a few breakaway parts where the drums take on an almost tribal quality, before being decimated by crushing guitar work.

On the other side of the coin (Or the seven inch IF YA KNOW WHAT I MEAN) Mangoo slide in with their track “The Grey Belly”, which presents an odd mishmash of inspirations and techniques. Lead singer Pickles sounds like the aftermath of a mad scientist’s attempt to fuse Dave Grohl and Ozzy Osborne together; while the results are not bad, they’re nothing write home about. The mix itself does not provide the dynamic experience of the first track, and instead focuses primarily on the vocals, thrusting their alright performance front and center. The instrumental par, however, is wrapped in an alluring southwestern twang that gives a glimpse into what Santana may have sounded like if he had been invested in the stoner genre. Overall, Mangoo provide an entertaining performance that is sullied by a few unfortunate artistic decisions for the direction of the sound.

If this seven inch was a competition, Enos would take home the victory. However, as a collaboration, the two bands’ sounds work well together despite Mangoo’s shortcomings in certain aspects. Perhaps if Mangoo had taken the lead, and Enos had finished the job, the lesser qualities of the former would be less apparent, but in the seven inch’s current state, one side will be getting far more play time than the other.