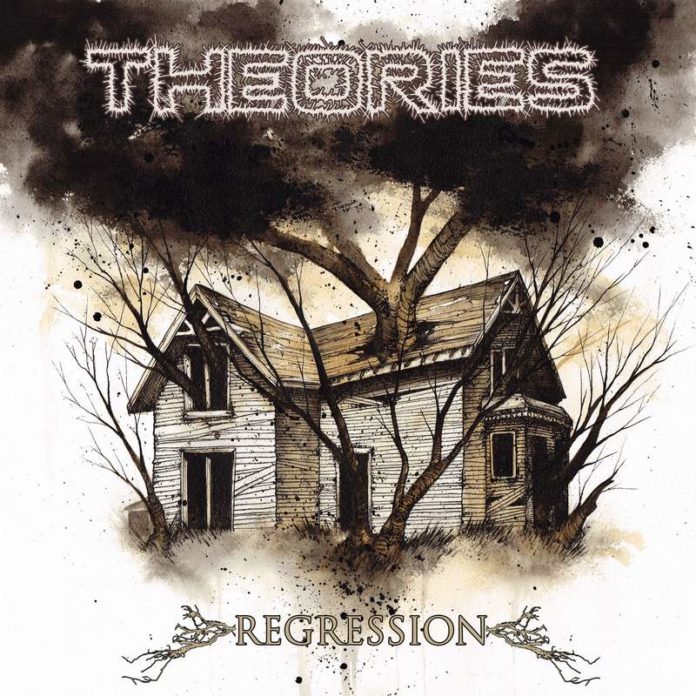 I don’t know what’s in the water in the Pacific Northwest of the United States, but that region has been putting out some amazing death metal, grindcore, and d-beat, and Theories’ debut album, Regression, is no exception.  Comprised of veterans of the extreme metal scene, they try to punish you with an incredibly abrasive and visceral sound that gets your blood pumping to the point where you think your chest is going to explode.  In what can be described as a swiftly violent musical love letter to American death metal/grindcore acts like Brutal Truth or Kill the Client, Theories have all the makings for a “by-the-numbers” copycat, but they quickly show that they’re not trying to ape their predecessors to a T.

Infusing the classic polka punk beats with breakneck speed and memorable headsplitting riffs, you are taken on a 29 minute, 10-track ride that quickly spirals out of control.  At times you can hear the combination of high-and-low vocals nearly summoning the presence of Kevin Sharp (ex-Brutal Truth), as well as make a guitar/drum duo like Dorian Rainwater and Bryan Fajardo (both are in Phobia and Noisear) proud. I don’t know what kind of guitar pedals these guys used, but it sounds like some sort of monstrous Boss HM-2 that d-beat bands like Nails or Trap Them would use; this helps the overall sound greatly, creating some really dissonant and oppressive riffs. Special mentions must go to tracks “Cycle of Decay”, “Abortive Crescent”, “First World’s Last Breath”, “Swimming in Mud”, and “Hell In Her Eyes,” because this is where Theories really, and I mean really, fucking shine.  This is not your daddy’s straight-forward death metal and grindcore, no sir.

To add to the already stacked reputation that Theories are making for themselves, they were able to secure Pig Destroyer and grindcore pioneer Scott Hull to mix and master Regression. He did a fantastic job of making sure every single instrument, screech, and growl had its due. Really, there isn’t much to say other than “bra-fucking-vo” to all those involved.

As I grow older I find myself becoming very quickly disillusioned by a lot of the newer extreme metal bands coming out. There is just something about the majority of them that does nothing for me. Theories, however, have “it”: an intangible asset that cannot be exactly pinpointed, but that you’ll hear immediately as soon as you put on Regression.  The only thing that pisses me off is that there isn’t more music on this record.

The way I feel about Regression can be better summed up in the words of comedian Patrice O’Neal, who said:

This is how Harlem got hooked on heroin in the ’20s.  You give them a taste of the raw, uncut dope, and as soon as they go [inhales deeply], you say “got you, you punk mother fucker”.

Theories sure as hell got me.

IN A NUTSHELL
Are you tired of all the useless copycat bands out there? Me too, so you should really do yourself a favor and pick up this debut record because it brings the death metal/grindcore bar real fucking high for 2015, and I can foresee this album standing the test of time. I think big things are coming along for Theories.
Reader Rating0 Votes
A truly abrasive and memorable death metal/grind debut that will leave you wanting more.
5