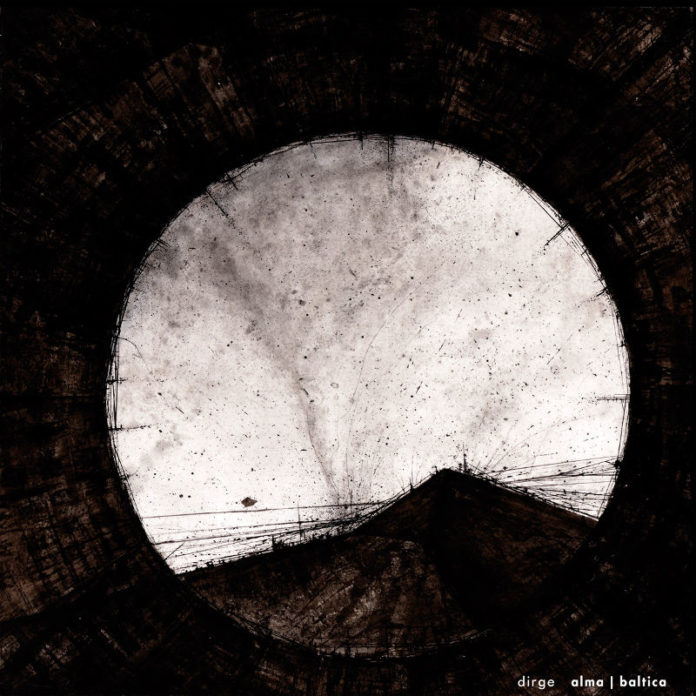 Having been around for over two decades, France’s Dirge have a fair amount of experience under their belt, complemented by recognizing the need to experiment with their sound to stave off stagnation.  With their latest album, Alma | Baltica, that experimentation has brought them to a heavily textured trek through five tracks, consistently attentive to the small details of the sonic layerings.  Merging disparate elements such as beautifully clean guitar echoes and unpredictable electrical surges (think something in the vein of the material on Ulver‘s Teachings in Silence compilation), the songwriting takes a meticulous approach to the arrangements, even when utilizing glitches, and the tonal power achieved as a result genuinely gave me goosebumps more than once.

While the whole of the album is fairly short, coming out at just thirty-five minutes, the meditative groove hit upon by the careful dissonance of the music leads to an effect of time dilation, making the album seem longer than it is by dint of just how massive the swell of the songs reaches.  As far as comparisons go, the experience tilts more towards Jesu than Godflesh, but there’s arguably more in common with Bill Laswell‘s moodier work than either of those.  Although there are metallic components, the music feels untethered, free to use whatever it can, from muffled samples of bull-fights to traces of sad horn exhalations, delivering five sweeps of deepening emotion without a hint of lyrics.

It’s an album which could wear a ‘Not to be consumed while operating heavy machinery’ sticker on its cover without that being hyperbole, even if that would be at odds with the generally sober somberness cultivated by the music.  And while thirty minutes and change may be short, when we compare it to the over-indulgent tendencies common in drone-friendly music, the short duration serves as both a recognition and a dodging of the likely listener fatigue that would set in over a longer stretch. It’s also free of the sense that drugs are a required component; although they might help, the near-cinematic approach to the compositions means that, given a suitably relaxed environment for listening, anyone with an open mind and similarly open musical tastes should find something to appreciate.

Ambitious without being heavy-handed, artful without pretension, and emotionally moving while avoiding sentimental wallowing, this is really good shit; in fact, it’s some of the best I’ve heard this year.  Even if this sort of thing is far outside the circle of your usual listening, if you’re reading this, I’d highly encourage you to give it a try.

THE BOTTOM LINE
Fantastic, powerful, imaginative, and stirring
Reader Rating1 Vote
POSITIVES
Careful handling of small details supporting looming slabs of atmosphere
NEGATIVES
A bit short, but better than having it lose power by dragging on for too long
4.5