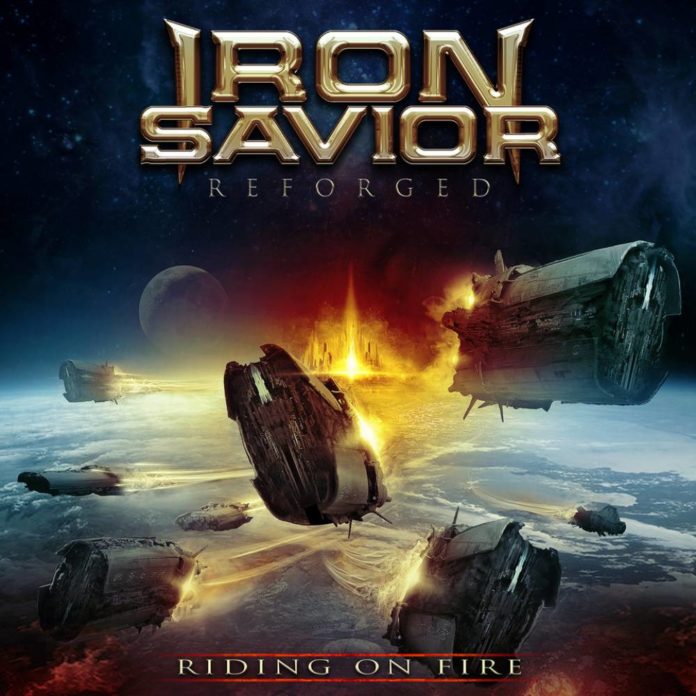 It can be a pretty risky venture when a band re-records earlier material; Exodus, for instance, re-recorded Bonded By Blood in 2008 to mixed reviews. Megadeth re-released their back-catalogue in 2004 with new mixes and mastering, but more controversially, newly recorded vocals, bass-lines, and guitar bits. This often comes across as a cash grab, though there have been exceptions, with Dimmu Borgir’s re-recording of Stormblast being a notable example (the band’s sound and production values had changed significantly by the time of the re-recording). Then there are cases like Germany’s Iron Savior. Having risen in popularity in recent years, demand for Iron Savior’s early albums necessitated the release of this year’s Reforged – Riding On Fire.

Much of Iron Savior’s early material has gone out of print, and re-issues haven’t been possible due to legal issues with their old label. Copies of the majority of their early records are hard to come by, so Iron Savior decided to completely re-record 19 classic tracks, both as a way to reflect their current production values, and as a way of getting some of the earlier tracks into the hands of new listeners. Much of Iron Savior’s 20+ years of existence has been spent telling a cosmic tale that fuses space travel and the lost civilization of Atlantis, and for many new fans, this is the first time they’re hearing the beginning of the story. The band has seen a number of line-up changes, with vocalist/guitarist Piet Sielck the sole remaining founder, but these 19 tracks are a testament to his and the band’s musical consistency over the years. The riffs and overall feel of Reforged – Riding On Fire places Iron Savior firmly in the guitar driven, classic heavy metal end of the power metal spectrum. There is little (if any) orchestration or synths to be found throughout the course of this record; rather, there are heavy, fast riffs that have a melodic edge reminiscent of Judas Priest and Iron Maiden. “Mind Over Matter” is a great example of this; the speed metal influenced riff is intense, while Piet’s vocals inject the tune with a big dose of melody. There are guitar and vocal overdubs galore on Reforged – Riding On Fire, but this isn’t really unusual in the power metal genre (Blind Guardian, for instance, almost always sound like there’s a choir singing along). This practice of layering multiple tracks gives the songs a larger-than-life feel, rather than making the production sound bloated.

Iron Savior are masters of their craft, weaving some pretty memorable riffs (the song “Iron Savior” comes to mind) with some excellent story-telling, and excellent production. New and old fans alike will find plenty to enjoy on Reforged – Riding On Fire, with classic tracks given some new life. Old-school fans need not worry, Iron Savior have stayed pretty faithful to the original arrangements of these tracks. If anything, this release is a celebration of the band’s lengthy career, and will hopefully continue to add to their prestige in the German power metal scene. If you like your power metal heavy and guitar driven in the vein of Gamma Ray or Helloween, grab a copy of Reforged – Riding On Fire, and you’ll become a faithful fan of Iron Savior in no time.

Iron Savior - Reforged - Riding On Fire
A double-album of rare tracks, re-recorded by one of the German power metal scene's rising stars, Iron Savior. For any fan of heavy metal, this is well worth your time.
Reader Rating1 Vote
Excellent production
Riffs are perfectly balanced between heavy and melodic
Despite spanning years of material, this collection of tracks has a pretty consistent sound
Maybe a tad too formulaic at times
4.7