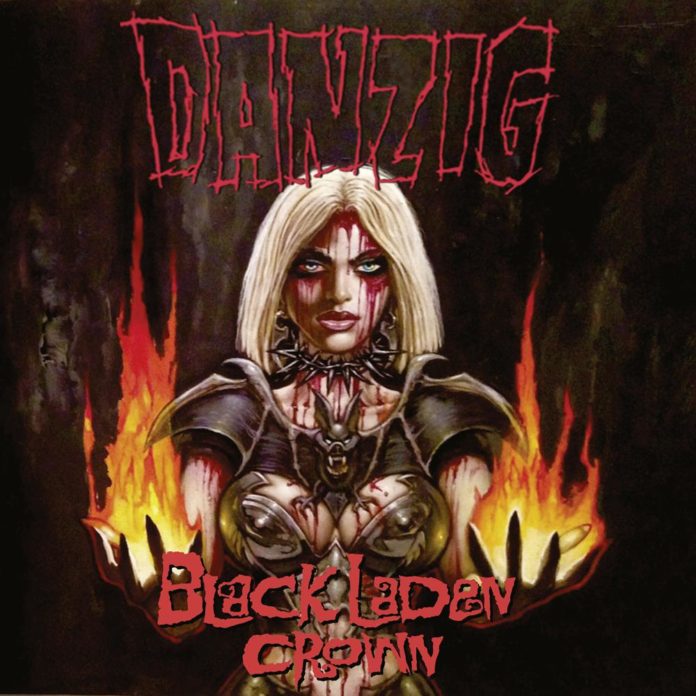 Love him or hate him, there’s no denying the impact that Glenn Danzig has had on rock & roll and heavy metal. Over the years, Danzig has perfected his trademark “Evil Elvis” croon over a variety of sonic landscapes, spanning from punk rock and thrash metal to doomy blues rock and gothic metal. Though the soundtrack gets updated with each release, you always know what to expect in the vocal department, for better or worse; Elvis Presley is an obvious influence, but there’s also a definite Jim Morrison vibe in there, particularly in Danzig’s rowdier moments. Following 2015’s covers album, Skeletons, Danzig is unleashing this year’s Black Laden Crown, the band’s first offering of original tracks in over 7 years.

Black Laden Crown is one of the doomiest records of the band’s career, with plenty of slow to mid-paced riffs that will have any Black Sabbath fan’s ears perking up. “Eyes Ripping Fire” is probably the fastest riff on the whole album, with a tempo akin to “Paranoid” by Black Sabbath.

Those hoping for a return to Danzig’s thrash/punk roots will have to wait a while longer. Though there are a few riffs that get into that same mid-tempo gallop (“Blackness Falls,” “Devil on Hwy 9,” and “But A Nightmare” being other notable examples), for the most part the tone sticks to a moody, doom-oriented sound. “Last Ride,” for instance, sounds like a Sergio Leone spaghetti western soundtrack, as played by Candlemass, with a super fuzzy, psychedelic overdrive pedal on the guitars. This mood is continued with the rather melancholy intro to “The Witching Hour,” which features overlapping guitar bits that provide an almost orchestral sound to accompany Danzig’s morose, understated vocal delivery. There’s a weather-beaten, road-weary quality to the vocals that add a surprisingly emotional layer to the music, which is a real testament to how good of a vocalist Glenn actually is. Sure, there are some miscues occasionally (I’m not too crazy about the bellowing vocals on “Eyes Ripping Fire,” for instance), but there’s a subtleness to the performance that matches the mood of the music more perfectly than anything the band has done in years.

The production on Black Laden Crown, though containing plenty of guitar overdubs, has a raw, lo-fi quality to it that really helps to enhance the atmosphere. Over the last decade or so, my biggest complaint with Danzig’s records has been production-related, with many of the records coming off as a little too polished, and sounding like Glenn’s vocals were just kind of stitched on. That’s not the case here, with a much more earthy, organic sound produced by both band and frontman. Glenn and company seem to be marching forward in perfect harmony on this outing and, as I mentioned before, this is easily the best Danzig record to come out since, say, Danzig 4. The riffs are heavy as hell, the vocals are strong, and the mood is every bit as dark and gloomy as you’d expect from this band.

Longtime fans of Danzig rejoice, “Evil Elvis” is back, better than ever, with 9 brand new slabs of heavy metal lushness. Detractors probably won’t have their minds changed, though I’d urge any fan of heavy metal to give Black Laden Crown a spin. This album may not be perfect, but it is definitely worth a few spins, with a few pleasant surprises, particularly in the vocal department.

Danzig - Black Laden Crown
Though not a perfect record, Black Laden Crown is still a pretty solid Danzig record, and easily one of his best in years.
Reader Rating1 Vote
Some killer doom riffs
Lo-fi production adds plenty of atmosphere
Glenn's vocals have some great, subtle moments that add a lot of emotion to the music
Glenn's vocal performance is a little too over-the-top in a couple of spots
The riffs can get a little repetitive and predictable at times
4.3