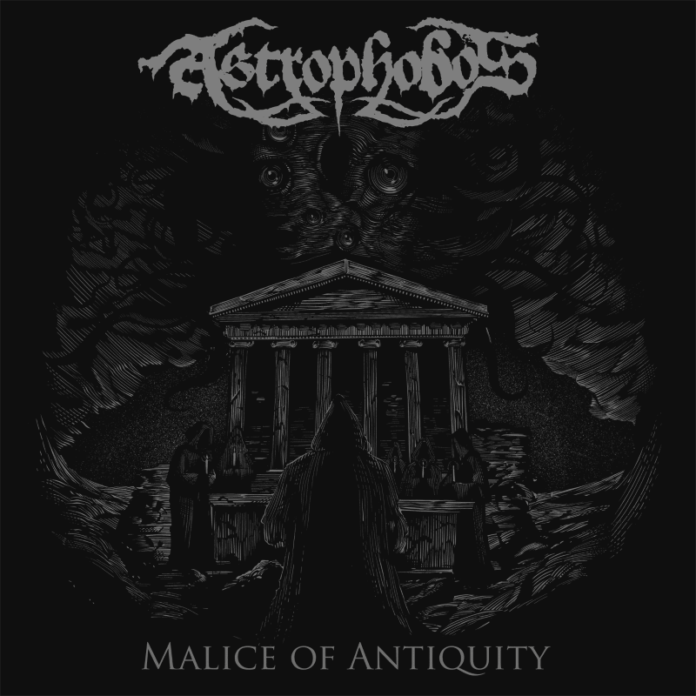 Astrophobos have been keeping busy since their debut EP in 2010, releasing something every few years. Although it’s been five years since their debut full length, Remnants of Forgotten Horrors,  they did give us a taste with an EP in 2016, preparing us for this, their sophomore LP.

Opening with the suitably-titled “The Summoning Call”, the album continues the group’s characteristic melodic black metal style, complementing guttural vocal growls with winding but clear-toned guitar riffs, blasting drum-work, and subtle but effective bass-lines. There’s arguably some death metal influence to the guitar melodies, but they’re thoroughly bound in service to the black metal spirit, with the finger-work and picking speed reinforcing those bonds.

Vocal presence is always a key point in non-instrumental black metal, and the singing here finds a happy medium in a lot of ways. It’s distinctly coarse, but not to the point of making the lyrics unintelligible. As if to make up for that to the black metal fans desiring unrelenting harshness, there’s plenty of wordless howls in gurgling timbre. And to counter the near-arrhythmic outlet of those outpourings, the cadence of the regular verses is worked to a fine degree, curling the rasping words right into the deft maneuverings of the guitar and its chords.

Through all the pounding beats (check out “Imperator Noctis” for a high-grade example of how Astrophobos can bring menace just through their rhythms) and gnashing roars, there’s a strange undercurrent of sedate assurance. While the guitar moves quickly, it tends to hold to each note for long enough to firmly establish its presence. For much of the regular song bodies, the drums likewise stick to the same rhythm for a few bars, usually refraining from the wilder percussive freak-outs of rawer black metal. While that regularity of patterning seems a little at odds with the themes of cosmic horror marking the lyrics, it’s handled well enough to easily overcome that quibble.

Taken all together, the album is an almost draining onslaught of well-worked song-writing and focused atmosphere. Breather breaks are rare but smartly placed, underlining the beating power of the music whenever it gets so persistent as to become common-place. My biggest complaint is that there’s no single ‘big’ track to point to as the one in which shit truly gets crazy. I say that despite the excellent “Imperator Noctis” running nearly seven minutes long; since it builds out of and into its surrounding tracks so effectively and organically, I don’t know that it would hit nearly as hard if it were pulled out of the context they establish. The narrowness of mood, while it suits and serves the intent of the music, is another small issue, as it leaves things feeling too confined to really click into place with the expansiveness of the lyrical matters.

Aside from those, any other faults I have with the album are too small to note. It manages its persistent aggression extremely well, continuously spewing it out without seeming in danger of running dry or forcing it. I can’t really remember the last time drums made me uneasy all on their own, but the ones in Malice of Antiquity managed that, striking me as truly sinister and oppressive more than once. And while I prefer at least a twist of psychedelia in my cosmic-horror-themed metal, Astrophobos were outstanding in tapping into those themes as well, whenever I tore my focus away from the instrumental side enough to follow the lyrics. All in all, a very impressive album, even if it does leave the feeling that the band could pull something even bigger and ambitious out on a future release.

THE BOTTOM LINE
Powerful and intense melodic black metal, but it suffers somewhat from musical tunnel vision.
Reader Rating0 Votes
POSITIVES
Strong showings on the rhythmic and melodic sides of the music, as well as the interplay
NEGATIVES
Runs in one gear for pretty much the entire album
4