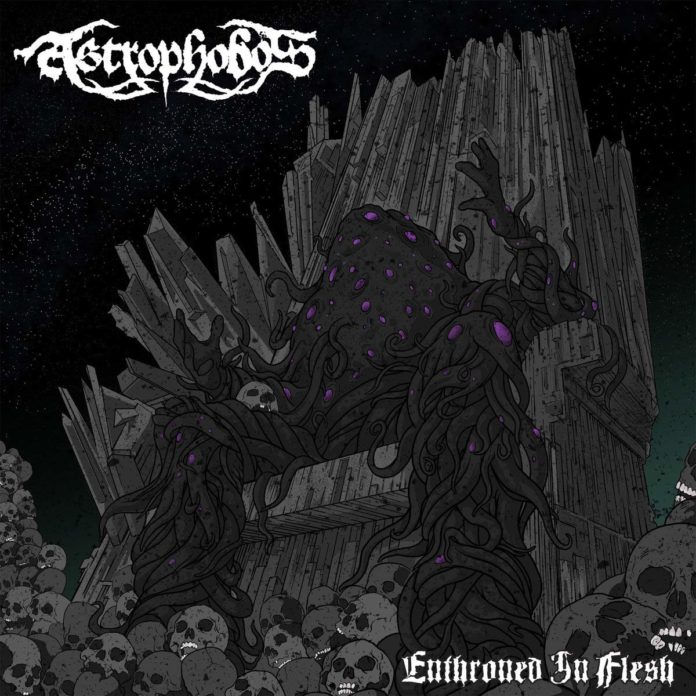 It has been 2 years since Sweden’s Astrophobos unleashed their Lovecraft-influenced black metal masterpiece, Remnants of Forgotten Horrors, an album that I thoroughly enjoyed. The classic-sounding record reminded me of some of the early Swedish masters, like Naglfar and Dissection, and has remained one of my favorite “discoveries.” The bar was set pretty high with Remnants of Forgotten Horrors, and I have been waiting anxiously to see what else Astrophobos have up their sleeves. The wait is finally over and, I’m glad to say, it has been well worth it!

Although, containing only 4 tracks, Enthroned In Flesh is technically an EP, it manages to pack more of a wallop than many “full-length” records. The music is both melodic and brutal, with a healthy dose of technical prowess, as can be heard on the flashy guitar solo on “Blood Libation.” The first 3 tracks of the record are fast, vicious, and highlight everything I love about Astrophobos’ previous efforts. The formula has remained mostly the same; the guitar work provides both the aggressive heaviness of each track, as well as the melodies. Vocalist/Bassist Mikael Broman sounds as aggressive as ever, and drums are provided, once again, by guest drummer Frederik Widigs, best known for his work with Marduk. The chemistry between Jonas and Martin is impressive, particularly the way the rhythm and lead guitar work intertwine with each other, almost serpent-like.

The first 3 tracks hit hard, but the real highlight of Enthroned In Flesh is the epic closing track, “The Cadaver Monarch.” Clocking in at nearly 8 and a half minutes, this song has some of the most melancholy guitar bits I’ve heard on a black metal record that doesn’t belong to the “depressive-suicidal” subset of the genre. The opening guitar bit is hauntingly beautiful and hypnotic, and the transition into full band and distorted guitars is an absolute black metal bliss. There are more changes of pace and tone in this one song than some bands have in their entire careers, and it reinforces my opinion that Astrophobos are an important band in the modern black metal scene.

The production on Enthroned In Flesh has a somewhat live feel to it; there doesn’t seem to be an over-abundance of overdubs, though there a few here and there. Once again there aren’t really any orchestral synthesizers or choirs, all the melodies you hear are created by the guitars. This has the effect of giving the listener a taste of what it’s probably like to see Astrophobos live, which is a breath of fresh air in age where so many records are way overproduced. On “The Cadaver Monarch,” there is some distortion used on Mikael’s vocals, giving them an otherworldly quality that matches the mood and tone of the song perfectly. As is often the case with black metal releases, there isn’t much bass guitar in the mix, although this time around I can actually hear SOME bass, and which blends in pretty well with the rhythm guitar bits. If you like the Swedish melodic black metal bands of the 90s (particularly Naglfar and Dissection), you’ll probably thoroughly enjoy Enthroned In Flesh. Astrophobos continue to grow musically, and have established themselves as a true force to be reckoned with on this latest release.

POSITIVES
Solid musical performance and songwriting
Perfect blend of heavy and melodic
A stunning closing track
NEGATIVES
Could use a little more bass guitar in the mix
Support the band (and US!) by purchasing their albums!
Amazon USAmazon UK