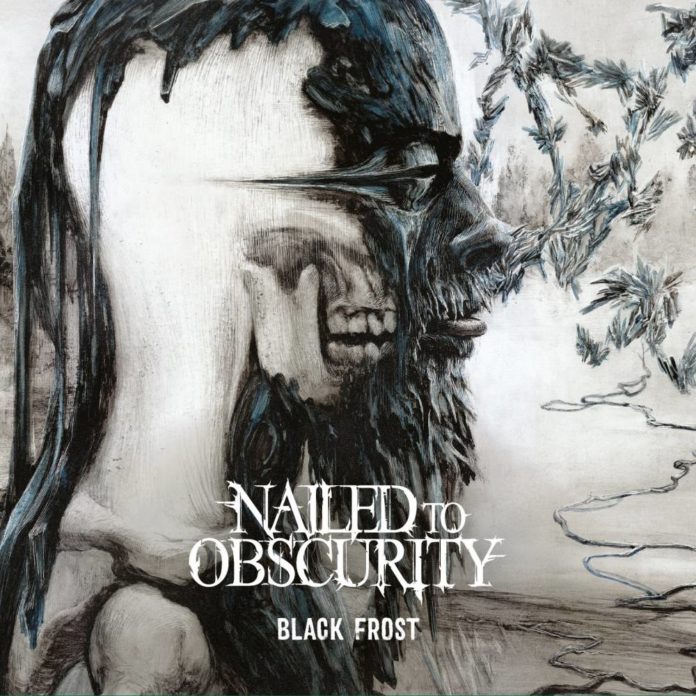 There have been a number of great bands over the years that mixed the heaviness of death metal and slower paces of doom metal. Paradise Lost, My Dying Bride, and Anathema took things even further, by adding a melancholy atmosphere and loads of melody into the mix. Similarly, Katatonia brought melancholy tones into their death/doom sound, and incorporated some progressive rock elements as well. Germany’s Nailed To Obscurity can trace their sonic lineage back to all of those pioneers and, with the release of their latest full-length, Black Frost, they are making a name for themselves in the death/doom genre.

With opening track “Black Frost,” Nailed To Obscurity immediately set the tone and pace for what the listener can expect to hear on the rest of the record. The vocals alternate between haunting clean vocals similar to those heard on the newer material by Katatonia, and guttural death growls, floating over a sonic landscape that is heart-achingly beautiful and crushingly heavy in equal parts. The bass and drums provide a tough backbone to the songs, with crunchy guitars and accenting the heaviness, while there are some lighter, floating guitar bits that create a sad dreamlike atmosphere. “Road To Perdition” alone is a metal masterpiece, closing the album with an emotional roller-coaster that truly brings in the best of both worlds in terms of heaviness and melody. The tempo never really picks up much past mid-paced on Black Frost, but you still feel like you’ve gone on quite a journey by the time the last note dies out. “Tears of the Eyeless” starts off with a jazzy chord progression and odd time-signature reminiscent of Opeth, particularly the material that saw them going in a more progressive direction, before giving way to a quiet, moody section with clean vocals and quieter guitars, only to build back into a heavier section.

The album’s production is very tight, with plenty of overdubs that permeate the atmosphere Nailed To Obscurity are trying to create, without sounding over-processed. The transitions between light and dark tones are handled quite well by the musicians, and this also transfers to the mixing board, with the quieter sections given just as much volume as the heavier ones. There’s nothing worse than having a clean guitar bit so low in the mix that you have to turn up your stereo to hear it, only to have your eardrums shattered by a quick stab of loud, overdriven riffage, a problem that is completely avoided in this album. If you like brooding, heavy death/doom with a healthy dose of melancholy and atmospheric tones, Nailed To Obscurity deliver that in spades. Solid musicianship and excellent songwriting don’t always go hand-in-hand, but they’re both present here. Nailed To Obscurity are certainly a band I’ll be keeping an eye on from this point forward, and I highly recommend you do the same.

Nailed To Obscurity - Black Frost
Reader Rating1 Vote
Excellent songwriting and musicianship
Perfect blend of heavy, melodic, and atmospheric
Tight production
Extreme metal fans that don't like clean vocals might be turned off by the singing
5