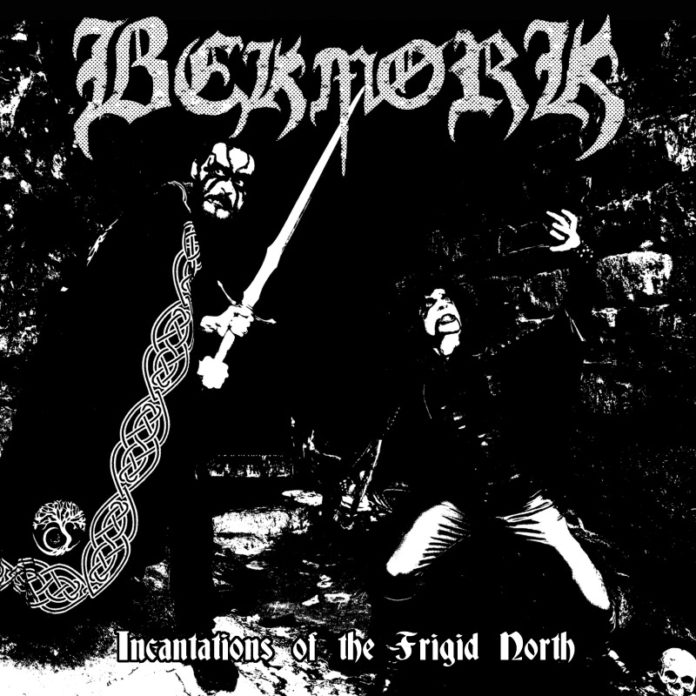 With their influences evident on the cover art, this EP of modern Norwegian black metal aims for a lo-fi vibe, with their ragged-sounding guitars and muffled drumming joined by gurgling rasps of vocal intrusion. having said that, while some garage-fi black metal hits strongly enough to stay memorable years after your last listen, Bekmork seem like they’ll need a little more time to get to that level.

The guitar riffs, though sufficiently grimy, lean more towards heavy metal swagger than black metal venom, and the drums show a similar inclination to take it slow and somewhat mellow. While that doesn’t automatically make for a bad experience, it’s so at odds with the flavors suggested by the cover art and track titles (e.g., “Creed of the Nihilist (Alt Er Ingenting)”) as to make for a rather jarring ingestion, and black metal fans aren’t known for being especially forgiving when something fails to meet their standards.

Taking the music for what it is, the band’s weird fusion of doomy heaviness and brooding gloom with the acerbic, near-disintegrating sonic quality of raw black metal does have some appeal. It’s an uncommon enough mixture to earn some notice just for that, but there’s also signs that the duo should be able to turn out some truly memorable stuff once they’ve got more experience and budget. Arrhythmic tolling of church bells is something I feel doesn’t crop up in either doom or black metal often enough these days, and hey, these guys have exactly that popping up in “The Bells of Klippe Hule (Summon Forth the Mighty Wakon)”.

At this point, the biggest fault I have with the music is that they seem to be trying to hit a middle-ground compromise between the two styles at all times. Letting the music veer back and forth between extremes of indulgence in each side might be more off-balance, but it also feels like it would lead to more interesting moments and song constructions. Failing that, just sharpening up the elements of each side would probably help significantly. There’s good ideas in play, but the execution leaves them feeling muddled and blunt. It functions as an introduction, but there’s not much to make people excited to hear the next release they might assemble.

THE BOTTOM LINE
Not a great introduction, but enough to let listeners know what interests the band, and to suggest that there's potential for good stuff further down the line
Reader Rating2 Votes
POSITIVES
Interesting style blending
The lo-fi emulation is obvious in nature, but generally handled well enough
NEGATIVES
The song-writing, particularly in terms of aggression, doesn't really step up to the potential of the genre fusion
3