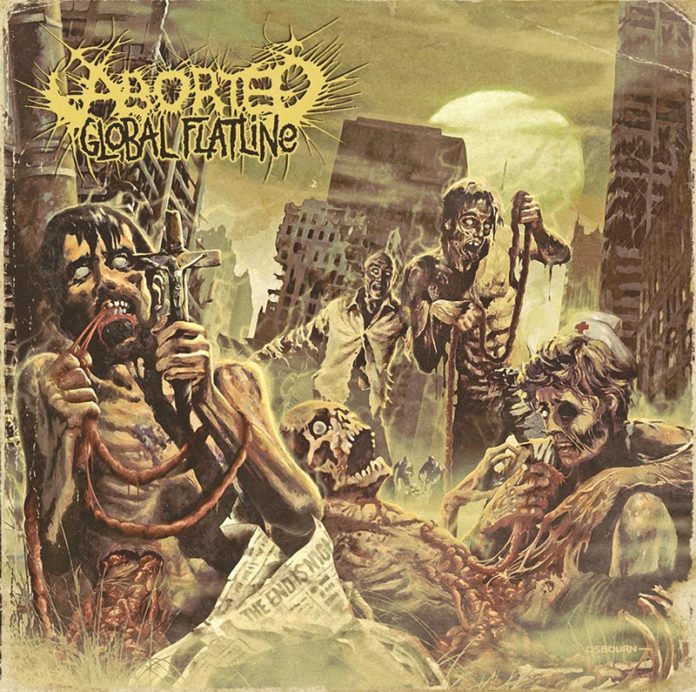 The year of 2003 was of great importance to me.  It was the year that I first discovered Aborted through their legendary album “Goremageddon: The Saw And The Carnage Is Done“.  “Goremageddon” was a showcase of how a group of lunatics who listened to far too much Carcass could effortlessly blend together relentless and uncompromising brutal death metal with catchy melodic leads and hooks together to create a sound that very few people were prepared for, and one we have not heard since then.  That album helped put Aborted on the map and became a must-have album in the world of death metal as a whole.  The music was so razor sharp, bombastic, violent, and guttural that it remains my fourth favorite album of all-time.  While their subsequent releases of “The Haematobic EP” and “The Archaic Abattoir” were pretty good in their own right, they couldn’t hold a candle to what “Goremageddon” had achieved.  Since then, Aborted has been plagued by unstable line-ups, which I blame for giving us sub-par albums like “Slaughter & Apparatus: A Methodical Overture” and “Strychnine.213“.  With Sven de Caluwé (vocals; System Divide) being the only original member left in the band I can imagine it being very difficult to find a working musical formula when a line-up can barely be kept for over a year.  However, when I read things from the band exclaiming that their new record, “Global Flatline,” was more of a “return to form” to their old days of brutal death metal, a glimmer of hope formed in me.  Could this be the bounce-back that I have always dreamed for Aborted?

“I’m gonna fucking rape your soul!”  Hell yes.  That is exactly how I want to be greeted when listening to a band such as Aborted.  Come at me full speed with scalpels akimbo, hacking and slashing at my ear drums.  After a short introductory track you are immediately bombarded with that sample, Sven’s dominating growl, furious riffing and plenty of blastbeats in the title-track, “Global Flatline”.  It is a very promising start to how Aborted may very well have gotten their edge and aggression back.  While their thirteen frantic homicidal tales are weaved through gore-laden imagery and more brutal death metal one could shake a stick at, the melody that I loved about this band remains intact, and is in no way forced into sections it does not belong.  While this album may not stand up to “Goremageddon” levels of adventurous riffing, it has many moments of its own that makes you appreciate “Global Flatline“.

Aborted have crafted a very well-done combination of brutality with the main passages with melodic leads being thrown on top of toe-tapping rhythms, and would normally segue into a stylish solo.  Normally formulas like this would grate on my nerves after a while, but I found that every song had its own unique way of keeping the familiar progressions nice and fresh for the listener.  I’ve listened to this album several times now, and there aren’t any portions of the music that I find to be hackneyed or stale.  They have really turned their style into a wonderful hybrid of brutal melodic death metal, and I have a feeling this album can actually gain quite a few new fans if they like tracks such as “The Origin Of Disease,” “From A Tepid Whiff,” and “Of Scabs And Boils”.  Even though the melody is quite prevalent in this album, fans of their older brutal style need not be disappointed, as this album has many moments that are reminiscent of “The Archaic Abattoir” with a much more modern death metal take on it.  One element of this album I found quite enjoyable were the slams thrown into the music for good measure.  They are used pretty sparingly and are never the main focus of the music.  They come at points where it fits in very well with the atmosphere and enhances the music greatly.  I am also sure the last track, “Endstille,” will surprise quite a few listeners with its soothing melody and apocalyptic atmosphere.  If you buy the Limited Edition of this album when it is released, you will be treated to two re-recorded bonus tracks: “Nailed Through Her Cunt” and “Eructations Of Carnal Artistry” from their legendary opus “Engineering The Dead.”

The production values of “Global Flatline” are top-notch and mixed beautifully.  Really, I don’t know how I can put it any better.  All of the riffs are crushing, the leads and solos are crisp and razor sharp, the bass guitar is audible and has a nice crunch to it, Sven’s vocals and multiple vocal layering are very powerful, and Ken Beden’s drumming is superb.  My only issue with the production is very minor, but sometimes the faster and lower-note staccato riffs can get buried underneath the bass drums and Sven’s vocals.  I think that was something that could not be avoided as this album is very bass-heavy, and if you combine that with the modern guitar tone then there are bound to be some clashes here and there.  There is also one part of the mixing that I am not happy with, but I’ll explain more below so as not to spoil anything.

Now, I want to spend some time talking about Sven de Caluwé’s vocals.  I always found him to have one of the best voices in death metal as it is completely recognizable, making his guttural spewage to be a huge trademark of the Aborted sound.  While he may have legendary status in my eyes, the last two albums he did made him sound utterly uninspired and flat.  Not only was it a chore to slog through the droll and generic death metal on those records, but Sven’s vocals sounding the way they did just really turned me off from the band.  I know it sounds harsh, but that is how I felt after seeing one of my favorite bands release two boring albums in a row.  But, I don’t know what the hell happened to him in between “Strychnine.213” and “Global Flatline,” but whatever it was, keep doing it.  Sven sounds more alive on this album than he has in nearly seven years.  His deep guttural growls sound absolutely visceral and filth-ridden.  His screams are as tormented as a vulvectomy with no anesthesia.  This is Sven de Caluwé at his very best, and he is who you get on “Global Flatline“.

Speaking of vocals, once it was told that there would be guest spots by vocalists like Trevor Strnad (The Black Dahlia Murder), Jason Netherton (Misery Index), Julien Trechan (Benighted), and Keijo Niinimaa (Rotten Sound) I was very intrigued to say the least.  After not being supplied with any information on which tracks they appear on, I had to listen through the album several times to try and make them out, and I was able to determine which track each of the four appeared on, and goes as such: Jason Netherton (“Grime”), Keijo Niinimaa (“Our Father, Who Art Of Feces”), Trevor Strnad (“Vermicular, Obscene, Obese”), and Julien Trechan (“The Origin Of Disease”).  The three of them certainly made their time with Aborted very useful since they did great on their respective tracks.  Although I do wish that Keijo could have done more than just be a part of the chorus.  Julien’s gutturals and Trevor’s screams are both delivered in very similar manners when compared to Sven’s, so when they are mixed the same way it was very difficult to tell them apart.  I wish the engineer would have tried to make Julien and Trevor stand out more on their tracks, because if you hadn’t known they were supposed to be on the album, you never would have noticed in the first place.

It has been almost nine years since “Goremageddon: The Saw And The Carnage Is Done” was originally released.  It will always be the definitive Aborted album in my mind, and while “Global Flatline” has done a lot to redeem the band from their previous blunders, it is not on par with “Goremageddon“.  The reason for that is because that era of Aborted is dead and buried, never to return.  Until “Global Flatline” was thrusted upon my ears, I always hoped that we would get another “Goremageddon,” but now I’m glad that the band has moved on.  They’ve moved on to bloodier pastures and found a new mixture of guttural brutality with unrelenting and moving melody that grabbed me with its sharp meathooks that wouldn’t let me go.  The only real hiccup was Trevor Strnad and Julien Trechan being very difficult to identify, but despite that mixing error, my standards for this record are very high, that is pretty damn good.  My needs were met greatly and I even gained a new perspective on Aborted, and they are back with a vengeance.