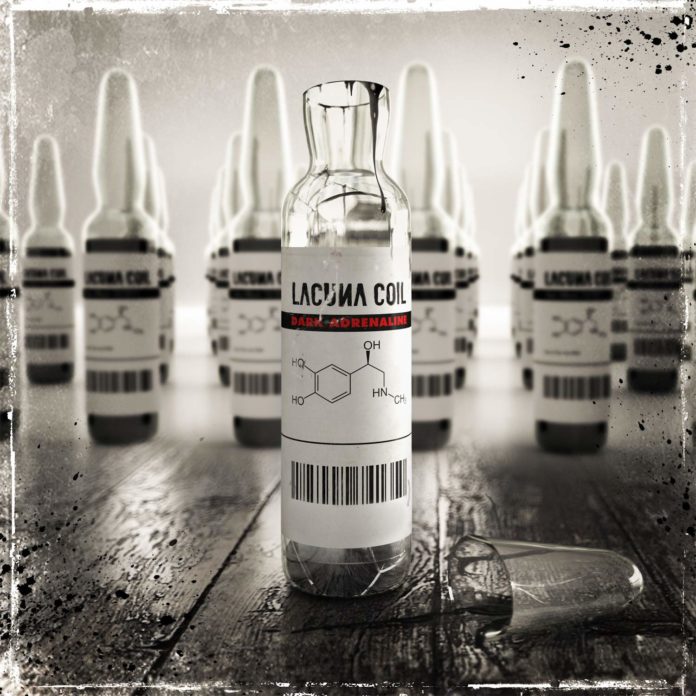 Hailing from Italy and being one of the most well-known female fronted metal bands, Lacuna Coil had built themselves up from nothing by giving us albums like “In a Reverie“, Comalies“, and “Unleashed Memories” that solidified them to be major players in the market of dark and gothic metal.  Their mixture of dark riffs and keyboard melodies mixed with Christina Scabbia’s soulful singing wasn’t exactly anything new at the time, but it was something a little bit different for the masses.  Unsurprisingly, the band had continued to grow through their plentiful career, and being able to stay together and consistent really helps when the same line-up has been together since 1998.  It has been nearly three years since their release of “Shallow Life,” an album that seemed to have a polarizing effect on two types of fans of the band; ones that enjoyed and accepted their gradual move to incorporating more “rock” elements into their gothic tone, and others who believe that while Lacuna Coil were growing as musicians, they had forgotten about their “roots”, and decry the band of “selling out”.  Coming back to more recent times, the sextuplet act has returned once more to give us a shot of “Dark Adrenaline” just to show that they won’t be forgotten in the myriad of darkened rock groups that have taken over the world market.

Within a split second of turning “Dark Adrenaline” loose you are treated to “Trip The Darkness”, which is the chosen single from this album.  It’s a bit odd to open up the album with the single since that’s putting all your eggs in one basket, hoping that you’ve hooked enough people into listening to the rest of the album after that one so-called “crowd favorite”.  I typically would rather have Andrea Ferro not be the lead vocalist in their music, but he actually shows that he has some worth in this song.  While he doesn’t necessarily have that great of a range, he does emote just enough to do a decent job to set you up for Christina taking care of the chorus.  The music itself was a mixture of generic angst-rock with little bits of melody that reminds you it’s a Lacuna Coil song.

As the album goes on from there, one can certainly tell that they have moved even further towards the realm of generic hard rock.  There is very little here to remind the listeners of the classic Lacuna Coil sound other than maybe some keyboard synth introductions to some of the tracks, along with some of Christina Scabbia’s vocal portions where she just lets loose and sustains a high note, and Andrea Ferro usually sounding horrifically out of place as usual.  It is actually pretty difficult to review an album like this because not only is there barely any content to differentiate one song from one another, but I also felt myself having to constantly restart songs because my concentration kept wandering.  If you were to tell me this was a Lacuna Coil album without there being any indication of it, then I would have absolutely no clue.

There are certainly glimmers of hope in tracks like “Trip The Darkness”, “Upside Down”, “I Don’t Believe In Tomorrow”, and “My Spirit”, but other than that it’s just a mash-up of the same schlock you’ve continuously heard on your local radio station, the one that claims “98.5 KROX, the only station that TRULY rocks!” in that typical awful and fake gravely DJ voice that they all have.  What really saddens me are also how painfully generic just about everything is on “Dark Adrenaline“.  Now, Lacuna Coil has never quite been a bastion of deep philosophical and unique subject matters, but just take a look at this:

I cross the line
The walk of shame
I hear the church bells
Through the acid rain
How can I dream
(incomprehensible lyric)
And pick up the pieces
Come back inside
I can’t deny
Don’t ask me why
I feel the pressure everywhere
It starts inside
Erupts in pain
It locks me down
Am I insane?

As I mentioned above, the only songs that have anything going for them are the four aforementioned songs, but Lacuna Coil found it fit to perform a cover of the R.E.M. classic “Losing My Religion”.  Minus the cool mandolin riff the original song was built around, you are once again treated to the usual formula of “Dark Adrenaline“.  Thankfully, Christina handles most of the vocal duties in this song and makes it somewhat bearable.  The chorus is just derivative guitar chords while Andrea speaks over them.  I guess it’s a good cover?  I really have no idea anymore,  having subjected myself to it one too many times.

“Dark Adrenaline” was definitely something that made me both tap my feet and shake my head in shame many times.  While it has its moments of catchy rock hooks, they are completely forgettable, and with it having the exact same standard hard rock formula over and over again, you get tired of this album very quickly.  Again, there are little bits of goodness mixed in, but it absolutely is not worth sitting through “Dark Adrenaline” to try and find them.  It seems as if Lacuna Coil has decided to not be musically threatening in any manner, and would rather just appease their brain dead listener with a frowning-face cookie-cutter.  If you enjoyed the bands step into forgettable radio rock over their past few albums, then “Dark Adrenaline” is for you.

[…] as soon as the opening track starts, it feels as a direct continuation to 2012′s Dark Adrenaline. All the familiar trademarks are here: strong intro, catchy melodies / hooks / […]