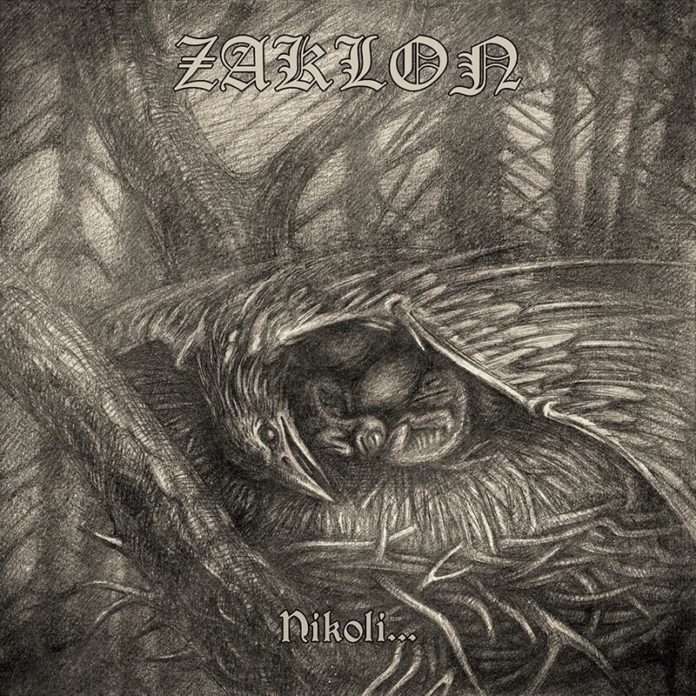 Ever since Varg Vikernes released Burzum’s first recordings in the early 90’s, there has been no shortage of one-man black metal projects. Sounds can range from a raw, primal approach like Judas Iscariot, to more ambient and atmospheric projects like ColdWorld. One advantage, I suppose, to the single member approach is the creator has full control over the final product, and that makes for some pretty compelling acts, like Xasthur, Leviathan, and Moloch, just to name a few.

Minsk’s Zaklon is the long-running black metal project of Temnarod, who also plays in Defunctus Astrum and Pogost. Zaklon plays a melancholic, ambient form of black metal that also has elements of pagan folk music, not unlike Burzum. Nikoli…, which translates to “never” in English, is the fourth full length album by Zaklon, and I’m left wondering why I haven’t heard about him before. There are moments of true melancholic beauty here, like the acoustic and keyboard-driven album closer, “Dym,” and the ambient washes of sound that start the album off, on the song “Atruta.” From the very beginning, you know you’re going to be getting some moody but melodic black metal; even when the electric guitars, drums, and shrieks kick in on “Atruta,” you’re washed over with some truly sorrowful music, pretty similar to Agalloch. Another band I’m reminded of is Ash Borer, who play a similarly guitar-oriented melancholy black metal sound; “Dolu” has some beautifully layered guitars that stick to the tremolo-picked style so prevalent in this genre, but manage to convey a lot of emotion in the process.

The production is a bit better than the average one-man black metal band standard; the clarity in sound on Nikoli… is remarkable, choosing to let the music provide the atmosphere, rather than a lo-fi production style like you normally get on a black metal release. My usual complaint of there being little to no discernible bass still stands, but that seems to be an uphill battle I’m trying to fight, and the excellent songwriting on this record makes up for any sonic shortcomings. I may not have heard Zaklon before Nikoli… but, trust me, this project is certainly on my radar now, and I strongly suggest you check it out as well. If you like your black metal melancholic, melodic, with a little pagan metal flair every now and then, along the lines of Agalloch (though, without the post-rock tendencies) Zaklon could be your new favorite discovery.