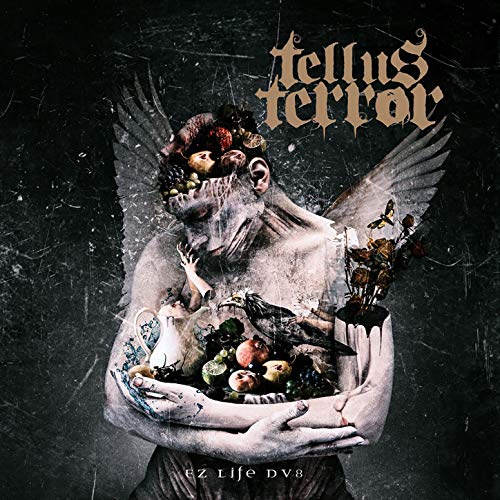 It’s not often that I find a band that I can’t fit neatly into a little sub-genre of heavy metal; when I do, the band usually gets my full, undivided attention. In the case of Brazil’s Tellus Terror, my attention is caught in much the same way that you can’t help but watch a train wreck as it’s unraveling before your eyes.

Founded in November of 2012, Tellus Terror play a sound that just throws everything in the heavy metal playbook into the blender, chugs it down, and then packages the resulting bowel movement into their debut album EZ Life DV8. I can definitely understand not wanting to pigeon-hole yourself into one particular sound, but Tellus Terror just sound completely juvenile and unfocused in their attempt to not exclude any style of heavy metal in their music. Every last song is a mix of styles, ranging from deathcore to symphonic black metal, gothic rock, and even a little bit of nu/rap metal; nothing is left out, and none of the varying styles stick around long enough to make an impression. Even the keyboard/synthesizer player can’t quite make his mind up if he wants to sound like Dimmu Borgir, The Devil Wears Prada, or My Dying Bride; just listen to the track “3rd Rock From The Sun” to see what I’m talking about. The vocals are all over the place, from death growls, black metal shrieks, hardcore yells, operatic singing, to female spoken word bits, all of them often happening in the same song. You get the feeling writing sessions for Tellus Terror go a little something like this: “hey, I have this melo-death riff, what should I do with it?” “Oh, I like that riff, here’s a riff I stole from Limp Bizkit, these riffs would sound great together!” “Hell yeah bro,” *fist bump.* It truly sounds like it was that haphazardly thrown together.

The recording is adequate, which is about the nicest thing I can say about it; you can hear all the instruments okay, though the vocals are just too overpowering in the mix for my tastes. The different styles are all approached with the same mixing style, which really sterilizes any atmosphere the musicians were hoping to create. I can definitely get behind Tellus Terror’s message of religious, gender, race, and musical equality across the board, but some things just don’t work well together. I love all styles of metal, but that doesn’t mean I want them all in the same goddamn song.

After listening to this album, I consider myself a martyr of sorts; I listened to EZ Life DV8 so that you don’t have to. I normally applaud bands for bringing some diversity into their music, but Tellus Terror really need to learn some focus, and try to stick to just ONE sound and get good at it before releasing another clusterfuck like this.