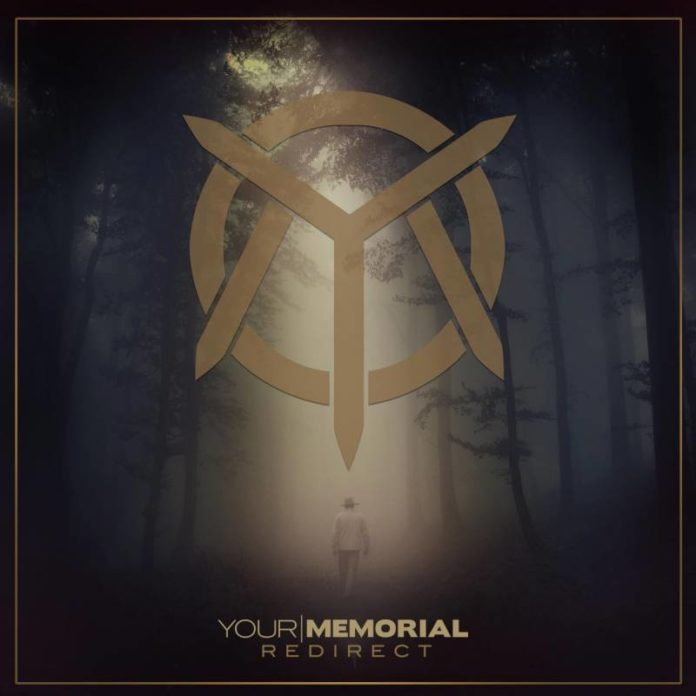 Minnesota based melodic metalcore/progressive band Your Memorial has come flying onto the scene these past few years. Redirect is their third full-length album in six years – and it comes on the heels of their suprisingly good album Atonement; so it actually has a bit of hype to live up to. I don’t think fans of Your Memorial are going to be disappointed with this album; but it might take a few listens to get accustomed to some of the changes in their sound.

One of the main differences between Redirect and Your Memorial‘s previous album Atonement is the pacing of the songs and track-list. Whereas Atonement was a fairly straight-forward affair; Redirect sees the band dip into the realm of progressive metalcore. This isn’t necessarily a bad thing; in fact it makes the album more fun to listen to as a whole. What this does mean, however, is that there are less songs on Redirect that you’ll be able to pick out and put in a playlist to listen to by itself for example when compared to Atonement. It definitely makes for a stronger album in the end; it feels much more complete and cohesive than anything Your Memorial has ever done in the past. Songs like “Eternity” , “Change The World” , and “Anthem” do a good job of squeezing in progressive elements in a relatively short timespan (there is only one song on the album that’s over 5 minutes long) without seeming too technical or out of control.

Still, with the slight tweakage to Your Memorial‘s sound; it’s probably going to take a few listens before fans start to fully come around to things. It’s not that it’s drastically different – because it’s not – but it’s just enough to throw you off a bit. I would go as far to say as the first song or two on Redirect are the albums weakest, which certainly doesn’t help matters. It’s actually a little weird how much better the album gets after the Instrumental interlude a little before the halfway mark. It’s not like the first few songs are absolutely terrible; but they just aren’t as good as the last half of songs you’re treated to. It’s hard to label any of the songs on Redirect as straight filler material. In fact, the only song that’s guilty of this title is “Redirect”; they could have pretty much just left that song off the album and it would be better because of it.

It’s worth noting that the production on Redirect is miles above the production on Atonement, which is a godsend because there are times when Atonement just sounded downright terrible from a “what the fuck is this doing to my ears” viewpoint of things. Gone is the cranked up bass and muddy instruments that made listening to Atonement a shitty experience. According to the internet, a mix of Josh Barber and Josh Schroeder worked on the production for the album (apparently Josh Barber also had a had in mixing Atonement) so kudos to them for fixing one of the biggest problems that album had. Redirect sounds great.

Instrumentally Redirect is, no surprise, Your Memorial‘s best performance. Guitars are almost always interesting; rapidly changing things up between the more choppy riffs you might expect from a band like Your Memorial, to almost more hardcore-inspired straight chugging riffs. You might read this and go “So what, every other metalcore band does that these days”, but trust me, they work great on this album. Vocals are almost always spot-on, with the exception of some of the clean ones. Most of them sound fine, but there are a few that sound a little weird and out of place at times. This is a problem that they had on Atonement and unfortunately it hasn’t been fixed on Redirect. Drums are…competent. It’s not that they’re bad or anything, they just don’t ever do anything that interesting.

Redirect certainly isn’t without it’s problems, but it’s by far the best album Your Memorial has written. If you’re a fan of any type of melodic metalcore like Counterparts or Misery Signals, than this album is right up your alley. If they fix some of the problems they have with consistency and awkward vocals, than we could have another big-time player in the progressive-core scene with two or three years.