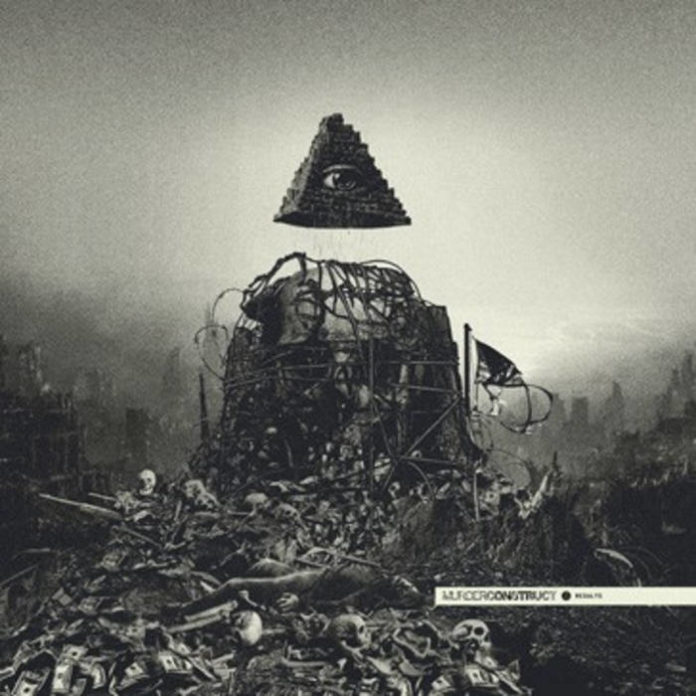 What would you say if I were to tell you that a side project that involved both current and former members of Cattle Decapitaton and Exhumed existed?  You would probably shit your pants like I had and wondered where you could get your hands on the records from such a lethal combination.  The grinding juggernaut known as Murder Construct is comprised of Travis Ryan, Leon del Muerte, Danny Walker, Caleb Schneider, and Kevin Fetus (classy name), who are on the cusp of releasing their first full-length that is simply titled “Results“.  Seeing as how Cattle Decapitation ripped my balls off with how good their latest album was, as well as being a longtime fan of Exhumed, I am more than anxious to see how Murder Construct put their devastating powers to use.

After the last few mediocre-to-terrible albums I have reviewed, it is extremely satisfying to see Murder Construct give me the “Results” I had hoped for.  There is no filler to be had here; just forward-thinking and pissed off deathgrind, and that’s all it should be.  Throughout the furious and winding near-thirty minute journey you are treated to Phobia-esque grindcore mixed with the catchy riffs that make newer Agoraphobic Nosebleed and Kill The Client so damn fun to listen to.

This means that while Travis Ryan’s vocals in Cattle Decapitation are rather adventurous, he does hold himself back to largely rely on his growls.  Every once in a while you can hear one of his piercing screams echo in the background, but you won’t get much more than that from him, and you know what?  It fits the motif of grindcore perfectly.  There are even a couple of surprises along the way, but I won’t spoil them, particularly during ‘Resultados’.  I could needlessly go on listing which songs inhabit the true essence of Murder Construct, but I can’t do that since each one has its own crushing identity that must be heard to be believed.

The production of “Results” is breathtaking from beginning to end.  Every single member has a stated purpose, and not only do they fill it, but they go on to raise the bar for any band in the future that is attempting this same deathgrind hybrid.  A wonderfully rich guitar tone permeates your being as each note from Leon and Kevin chips away at your psyche, all while Danny and Caleb help to bring their low ends that are akin to a non-stop grinding atom bomb attack.  I already mentioned Travis’s vocals (Leon helps with some back up, too), but the one criticism I have is that they could stand to be a little higher in the mix.  At times they are drowned out by the rest of the catastrophic cacophony when they could really help further that crippling and overwhelming feeling of aggression that Murder Construct does so well.

After releasing only an EP in 2010, “Results” is a magnificent way to make sure that people will want to know who Murder Construct is.  Their brand of visceral death metal with razor-sharp grindcore is something that you will not see very often, let alone done this well in the first place.  It is with great hopes that Murder Construct has the ability to become just as big as the other bands the members are a part of, because they deserve every ounce of recognition that “Results” will get them.