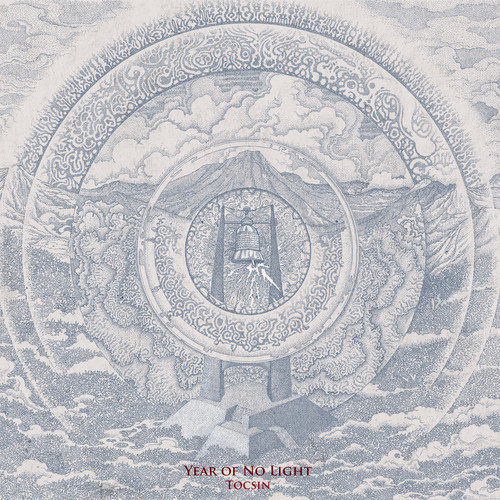 There have been an awful lot of post-metal bands over the last decade or so, and for every one good band there are three or four that just seem to be “cashing in.” Fortunately, France’s Year Of No Light belong to the first group. To say that they’re influenced by Neurosis is a lot like saying Municipal Waste are influenced by Metallica; It’s really kind of the point.. They’ve been a busy band since their inception in 2001, releasing a demo, 2 full length LPs, a live album, an impressive amount of splits, and even a soundtrack for the movie Vampyr.

Tocsin, the band’s latest effort, starts off pretty ominously with keyboards, sparse tribal drumming, and some light guitar picking. There’s an ambient vibe to it, which might lull you into a false sense of complacency, but don’t let if fool you, this is a HEAVY record. About a quarter of the way into “Tocsin”, the first track, guitars and bass come in full force, and absolutely crush you; dynamics is the name of the game. There’s a lot of ebb and flow and a lot of contrast; one minute the tone is serene and contemplative, the next it’s an all-out sludge fest. While Year of No Light keep things mostly at a glacial pace, very indicative of their doom metal influences, there are moments when things get a little more mid-paced, “Géhenne” being a prime example. Some of the guitar work is tremolo picked, but this is done more for texture than any actual tempo changing. There’s a small amount of sampling, but not as much as some of the band’s peers, like Mouth Of The Architect for instance. Although Shiran Kaïdine is credited as doing vocals, I honestly didn’t hear any; after all, in this particular genre the vocals aren’t nearly as important as the mood that the music itself is meant to convey, and Year Of No Light definitely paint a more vivid picture sonically than they would if they added vocals and lyrics. The very album title, Tocsin, French for “warning bell”, gives a hint as to the content of this album, as its droning heavy sections sound like the tolling of the monolithic bell depicted on the cover.

The production is flawless. Despite there being multiple layers of guitars, keyboards, and washes of electronic tones, you can still hear everything going on, and there is a LOT going on. When the guitars aren’t busy bruising your cranium with super fuzzy overdrive, they caress you with soothing reverb. The keyboards and electronics are used more as enhancements than as instruments, and don’t take away from the heaviness, which is quite an achievement. The drums are crushing when they need to be, and at times very hypnotic. The bass is really my favorite part of the album, as Johan Sébenne has a very heavily overdriven tone, not unlike what you’d expect to hear on an earlier Electric Wizard album. Since none of the instruments really stands out more than the rest, there’s truly a sense of everybody working together as a single unit. While this can probably be accredited to the tightness of the musicianship, I’m going to give the production some of the praise as well. The music swells into crescendos, and the overdriven guitars and bass build up to volumes so high that they actually sound like they’re crackling, which isn’t necessarily a bad thing.

Although this is an awesome album, and definitely a high mark in the genre, it’s not without flaw. At times the drums build up some speed, giving the music a bit of a crescendo, only for the music to not really “take off”;. “Géhenne” is a great example of this. Even though it’s the shortest song, so you’d expect the band to get to the point relatively quickly, it doesn’t go anywhere, which is frustrating. Still, this is really my only complaint

If you like sludgy atmospheric metal like Neurosis or Cult Of Luna, or even if you’re more of a fan of post-rock bands like Godspeed You Black Emperor or Mono, I’d highly recommend giving this album a try. You will definitely find what you need.