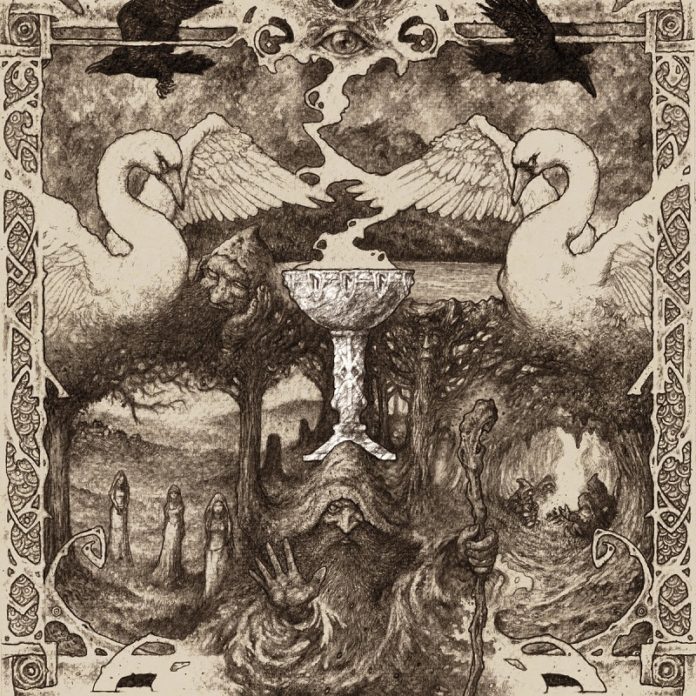 The popularity that folk-influenced metal has seen in the last few years has also resulted in a heightened interest in folk itself. Beyond the merely aesthetic (e.g. drinking from horns and wearing mjölnir pendants) this interest has also been directed to the soundscapes of European folk music. Seeking a place alongside folk bands like Heilung and Warduna, Wolcensmen deliver a good atmospheric album that, at same time, raises the question of where the borders of the genre really are.

A project of Winterfylleth’s Dan Capp, Wolcensmen area natural companion to the folk-tinged black metal of the former. In fact, if you ever listened to Winterfylleth’s The Hallowing of Heirdom, and wished that the band would just continue producing that kind of stripped-down acoustic folk music (instead of their signature atmospheric black metal), then Fire in the White Stone will be just what you’re looking for.

As a concept album, Fire in the White Stone tells its own version of the hero’s journey, paying homage to the likes of Tolkien and Wagner. In order to tell this story, Wolcensmen have at their disposal a wide palette of sounds and styles, which they exploit in order to move the plot along. There’s a clear desire to paint a clear atmosphere what’s happening to the protagonists, conveying the overall feel of the scenes, even if you’re not fully aware of the plot. This is evident in tracks like “Hunted” where a synthesizer (reminiscent of John Carpenter’s soundtrack work) conveys of a feeling of urgency and fear. Something similar happens with the claustrophobic “Of Thralls and Throes,” which masterfully uses the cello to transmit a sense of dread.

For all of the positive things that are evident in this album (from the neoclassical picking to the masterful development of the ambience) the band itself does face an uphill battle in finding their place. Although “metal” is sometimes used as a metonymy, trying to convey a certain attitude in the music, going too far with that practice makes the term completely meaningless. The fact of the matter is that Wolcensmen are not a “metal” band. This is not a criticism, but merely a sonic description. Because of this, although there’s no denying that Capp‘s compositions in Fire in the Stone demonstrate his talent, it’s hard to see the appeal that the band might have outside of the  renaissance fair niche, or even how they might appeal to the Winterfylleth fans that like their folk mixed with black metal, and not on its own.

A fun album that, regrettably, offers little in terms of repeat listens.
Reader Rating0 Votes
Good use of music to convey the atmosphere of the story
Its story-telling structure results in an absence of standalone tracks
3.5