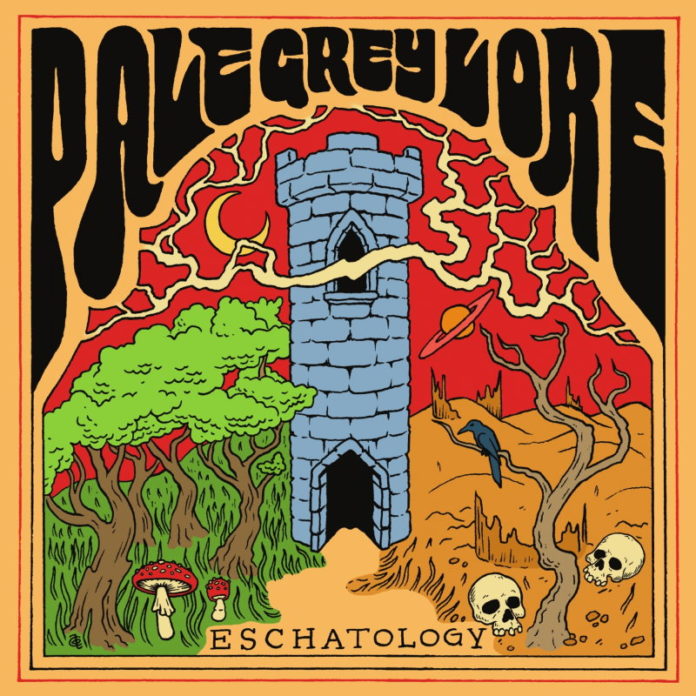 Having enjoyed Pale Grey Lore‘s debut album back in the day (good grief, has it really been three years?), I was happy to see that they had finally released a follow-up (and how could you not smile at that cover art?). Here, the mix of heavy rock, stoner doom, and garage psych rock on that debut has been given a rinse and a shave in the form of tightened production, while still sounding both energized and true to the band’s original spirit.

Leading with the sunnily heavy groove of “Sunken Cities”, the band reiterates their simmering mix of styles and influences, with that particular track showing a clever fusing of ’90s grunginess with acid rock looseness and an almost Steve Miller-like way with persuasive hooks. That mix of stony weight with sunny positivity also marks most of the ensuing songs, jumping sassily between dark bass grooves and giddy guitar outpourings. Over in his corner, drummer Adam Miller (one of the two founding brothers) brings just as much flexibility to his playing, matching the shifts with supporting power and finding creative ways to fill in the hollows. Sibling Michael Miller, in addition to guitar, theremin, and mellotron, also provides lead vocals, which find an earthy happy medium in meshing with the strings. All the components flow together to make songs that are weirdly happy in tone, which throws the contrast of the lyrics (dealing with a post-/mid-apocalyptic setting for the album’s concepts) into even sharper relief.

Loaded with riffs and fills that feel almost instantly familiar, the album is a genuine testament to the band’s capabilities. As only their second album, it’s frankly astounding how easy-going they manage to make the alchemy of their stylistic brew seem, and its casual, persistent hooking of piece after piece directly into memory is a marvel unto itself. Sometimes, it feels like they’re an alternate reality version of Alice in Chains with something to smile about; others, it feels like Blue Cheer time-warped and soaked in a tub of liquefied Sleep albums.

Throughout, they play fantastically, without over-reaching, always finding new nodes of interest to wiggle on, without derailing whichever song they’re basking in at the time. Really, the only objection I have is grounded in one of their strengths, that they play it so cool all the time that it almost puts a damper on the excitement the music deserves; it’s so chill while executing awesomeness that not being laid-back in appreciation of it feels a bit off. At the same time, it really does make it feel as though the band has no hope higher than to play their music and let people enjoy it, which feels like an attitude that’s all too rare these days. Other than that very minor qualm, I have nothing but good things to say about this album, and I hope that PGL get the recognition they deserve for this excellence. Get yourself a copy, listen to it with open ears, and have a good time.

THE BOTTOM LINE
Quite possibly my album of the year, Eschatology comes off as a band creating the best album they can at this time in their lives, while recognizing and anticipating the changes to come. Fantastic work, through and through.
Reader Rating1 Vote
POSITIVES
Fluid styles
Great hooks
Impressive interplay
Compelling songs
Powerful structuring
Fun times
NEGATIVES
Kind of feels like it's lacking a real break-out moment or track, even with the denouement of the final track.
4.5