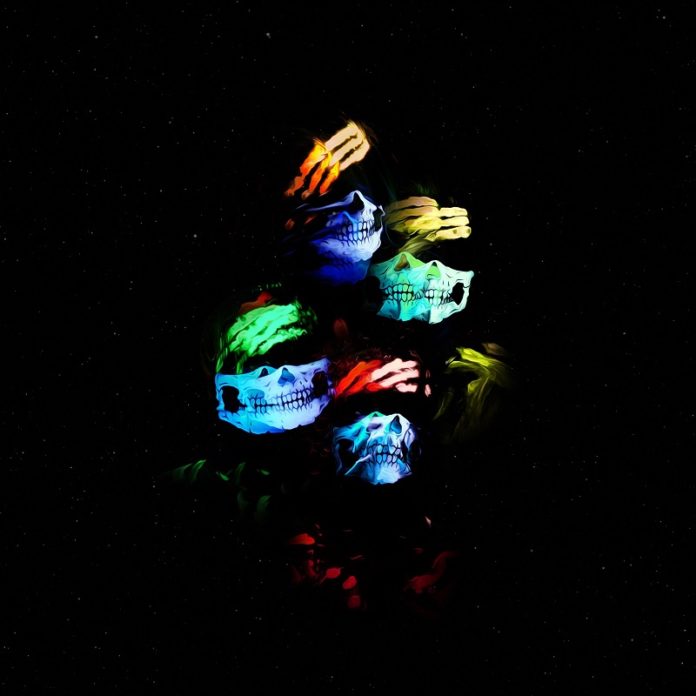 Although released by a label that is largely associated with black and extreme metal, The New Deathcult‘s eponymous debut is more reminiscent of  Incubus, Queens of the Stone Age and Foo Fighters, than it is of black metal. The problem is that it is so reminiscent of them, that it’s sometimes hard to tell where their sound ends and TNDC‘s own style begins.

As far as their image goes, The New Death Cult seem to have taken some inspiration from Ghost, mixed in with a dose of Nathan Pyle‘s comic Strange Planet. Indeed, according to their own mythos, TNDC are a group of aliens who, for years, have been observing humanity’s behavior, and who have compiled their views into these songs. As such, the lyrics read like stern critique of the status quo, with attacks against corporate media, pollution, greed, war, etc. While it’s true that TDNC are not exactly treading new ground when it comes to the topics they cover, that doesn’t make them any less important.

Musically, TNDC do have a very pop-rock sound, very reminiscent of what was playing on basically any FM radio of the late 90’s and early 2000’s. Bands like Fuel, Queens of the Stone Age and Foo Fighters definitely seem to have played an important role in shaping their sound. While this means that the songs are catchy and radio-friendly, it also means that some of them do feel a bit dated, like something that should have been released 20 years ago (“The War” is the best example of this). And while some of the songs are good enough on their own (“Zeitgeist,” “Blood of Babylon” and “Light Spills Over” are probably my favorites), the bulk of them are “just-OK.”

While listening to TNDC‘s debut will not be a magical and transformative experience for anyone, you can definitely enjoy a few spins. The problem is that there are so many callbacks to alt-rock giants that it makes it hard to find a reason to listen to this album instead of just going back to the originals they’re trying to emulate. Hopefully, when The New Death Cult communicates with Earth again, they will have found a sound of their own.

The Bottom Line
While by no means a bad album, The New Death Cult's debut feels dated and not particularly interesting. While there is definitely some good songwriting in there, for now it lacks its own identity.
Reader Rating0 Votes
Catchy songs
Attempts at socially-conscious lyrics
We get it, you like the Foo Fighters
3