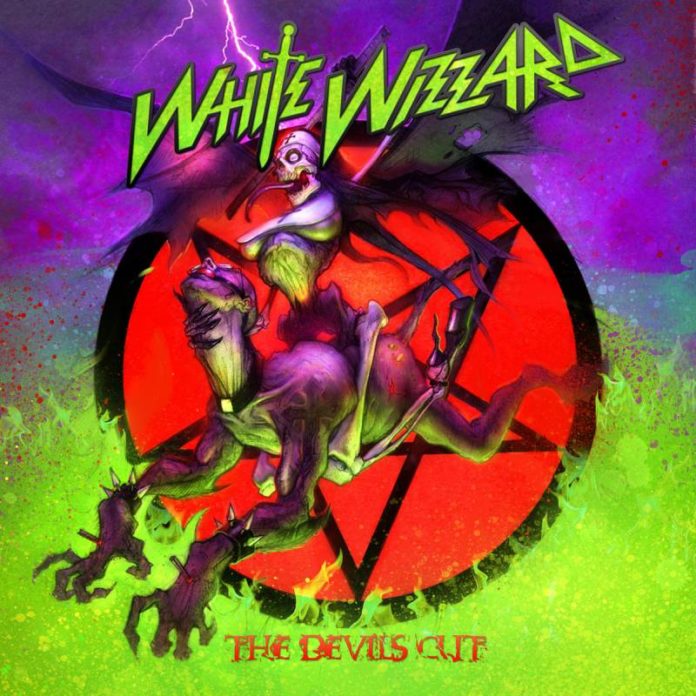 There are some bands that, no matter how much they try, will never succeed in creating the sound that they so desire. To be a little colourful, it seems as if some have been worshiping at the wrong altar. And while some bands will desperately try to ram the pieces into the wrong pegs, others seem to have things just fall into place. Not that they’re doing it in a nonchalant manner, but the way that they do execute it seems so flawless and fancy free that it appears as if they’ve done it in their sleep. White Wizzard have with their latest album The Devil’s Cut done exactly that. I have no idea how they did it, but these guys came up with such a stellar album without seeming as if they broke a sweat doing it. there’s something special here folks.

From the get-go The Devil’s Cut sounds like a mashup of Iron Maiden meets Blind Guardian, which is by no means a negative mix. Assuredly, they pounce through every song with a combination of technical voracity and a set of vocals to match. The bass is that familiar Steve Harris style bouncing bass, with the accents in the typical places, galloping from chorus to chorus.  The guitar combo of Dreyer & Wallner power through every second of every song, with blistering guitar solos that you would think would set your ears on fire or at least heat them up to a very uncomfortable temperature . The group effort on every single track is more than commendable and The Devil’s Cut is more than jammed with moments that will make you smile, remember back to a time when metal didn’t suck and go “Daaaaaaaaamn, that’s some hot sauce on that there track.” From “Strike the Iron” to “Torpedo of Truth”  to the very end, The Devil’s Cut references so much old school metal that you’d think you’d know where it’s going. But in fact, you’d be wrong. In fact, The Devil’s Cut still manages to please and surprise you all the way throughout the album.

However, where White Wizzard slips in terms of genre is just a little bit puzzling, since it’s not power-y enough to be a power metal album neither is it harsh enough to be thrash, nor a is it 80’s enough to be straight up traditional metal.  Again, while they have characteristics of all of the former metal sub-genres, they don’t tend to lean on either too hard. What White Wizzard have concocted with The Devil’s Cut is a pseudo-modern-retro-classic-metal mix of all great things past, neatened up and put into a very presentable, and ear bleedingly good package.

I can see you peering closely in between the words trying to find some sort of back handed comment, but you really won’t find any of those here. Does the album have faults? Not really, no. Sure there are some parts early on in the album that are a little too Blind Guardian like for me, but in all seriousness, it’s still pretty darn good even when it isn’t. On the flip side, the fact that it isn’t Blind Guardian meas that you don’t have to bone up on your literature lessons before picking up The Devil’s Cut.

It’s fully surprising that White Wizzard isn’t a much bigger name in the scene. They display an aptitude for metal both in terms of their musicianship and their song writing skills that are so far beyond what most bands ever get to, that it’s crazy to imagine what their future will sound like. Rest assured, White Wizzard will amaze later in the future as they have now, with The Devil’s Cut