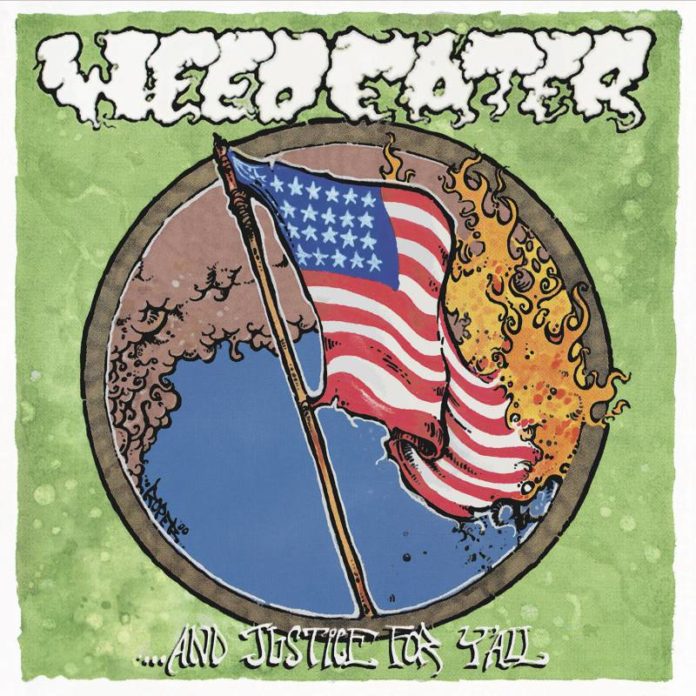 In the stoner metal genre there are few bands as notorious as Weedeater, and their colorful front man “Dixie” Dave Collins. After the demise of seminal sludge act Buzzov•en, Dave focused his efforts on Weedeater and proceeded to craft what he and his bandmates dubbed “weed metal.” Additionally, Dave also had stints in other notable sludge/stoner acts, such as Bongzilla, Sourvein, and Hail!Hornet, and at one point was even sidelined from music altogether in order to recover from an accident involving his favorite shotgun and the loss of his big toe (yes, you read that right). Clearly, this is a man with a lot of stories.

… And Justice For Y’all was the first LP released by Weedeater and, as part of their newly inked deal with Season of Mist, has gotten the full re-mastering and re-release treatment. With a sound like what Weedeater crafted, it’s easy to be wary of a re-mastered version of any of their early albums, being that the sound and production is just as important as the songs themselves. Fear not though, my fellow sludge fanatics, …And Justice For Y’all was treated with absolute reverence and, indeed, has lost none of its potency [insert weed joke here]. Waves of fuzzed out overdrive on bass and guitars, thudding drums, and vocals that sound like a permanent smoker’s cough are in full force and have been brought up in the mix. If I had any complaints about the original recordings, they’ve all been addressed and taken care of with this re-issue; the vocals are more present, the guitars and bass have more heft, and the drums absolutely crush. “Monkey Junction,” the second track, sounds absolutely massive, and fans of Dopesmoker by Sleep or Dopethrone by Electric Wizard that may have missed out on this particular gem the first time around will certainly have their jaws hitting the floor. Dave’s vocals are truly one of a kind; hoarse, raspy, and absolutely menacing, and you can really appreciate the power behind them with this new mix. While it’s a real treat to get lost in the haze on the slower numbers (you can almost get a contact high just listening to them) there are plenty of moments that will have you stomping your feet and banging your head, such as the more up-tempo numbers like “Calico” and “Free.” To simply label these guys as a stoner doom band is really doing them a disservice, as there are a variety of influences to be picked up on, though admittedly filtered through a cloud of marijuana smoke. The final track, “Bucket,” for instance, is simultaneously a blues and hardcore song, going from a slow thick groove, to a speedier punk-like section, and then back into the sludge-oriented groove… all of this in three and a half minutes.

Judging by the song titles it’s easy to want to lump Weedeater with the rest of the southern sludge scene, but don’t be so quick to judge. …And Justice For Y’all really should be listened to in its entirety, and thanks to this freshly re-mastered version you can pick up on all the nuances that you might have missed when this record first dropped in the early 2000’s. Even if you already own this album, giving this version a listen will be worth your while, as there is more volume and depth now. Stick this one in your pipe and smoke it!

Classic album gets a face-lift, and is introduced to a new legion of fans
Newly re-mastered, this stoner classic has some fresh life breathed into it, the instruments and vocals are easier to discern
Stoner metal detractors most likely still won't "get it"
4.5