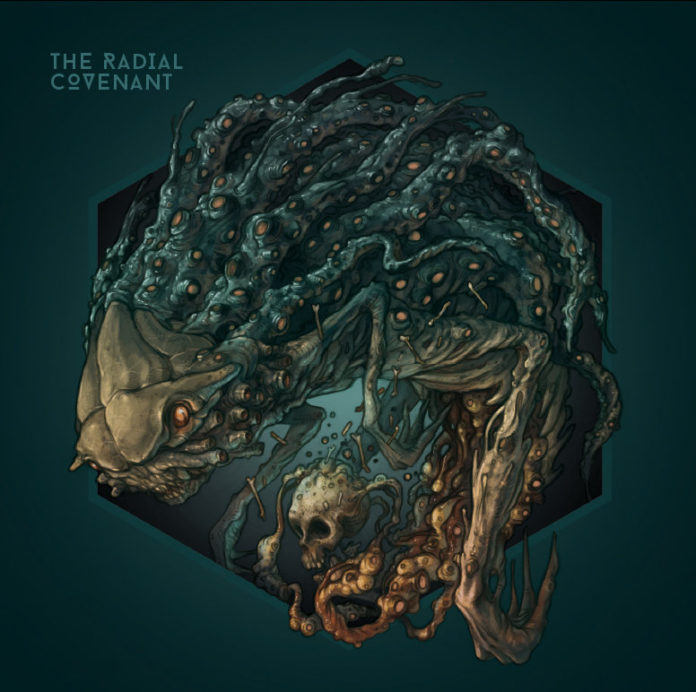 Hannes Grossmann is no stranger to the metal world. Best known for his work as drummer/main songwriter in Obscura, as well as his drum work in Blotted Science, he has been considered a drum virtuoso of sorts, and has even released an instructional DVD.

The Radial Covenant is Hannes’ first release as a solo artist, having successfully funded the project on IndieGoGo. The music here isn’t too far removed from what you’d hear on an Obscura record; death metal with a heavy prog-infused sound, and some insanely technical playing all around. In addition to drums, Hannes also provides the bulk of the guitar-work, and I have to say I’m thoroughly impressed with the man’s six-string abilities. There are melodic lead guitar lines, loads of interesting guitar effects, and some truly punishing death metal moments (just check the last minute or so of “The Voyager”).

There are several guest musician appearances, including fellow Obscura members Linus Klausenitzer on bass and Christian Münzener (who provided a memorable guitar solo on “Alien Utopia”). Although the list goes on, the amount of guest musicians isn’t really distracting, as Hannes is really the mastermind here, and has written every note painstakingly.

The production is, again, very reminiscent of the production you’d expect on an Obscura record; super clean, but not sterile, as the heavy bits are still in your face with their intensity. As you’d expect, the drums and the guitars are pretty high in the mix, but there are enough changes in tone and intensity to give every instrument and vocal bit a moment in the spotlight. Occasionally the amount of overdubs and layers can be a bit too much to take in at times; there are a lot of different guitar lines happening at the same time, and it can come off as really busy sounding.

If you’re familiar with Hannes Grossman’s musical output up to this point, The Radial Covenant will fit right in with your collection. If you’re new to the game, however, this is progressive/technical death metal at its finest, and sometimes will leave you breathless. With a little more restraint, I can definitely see Hannes Grossmann having a successful career as a solo artist.