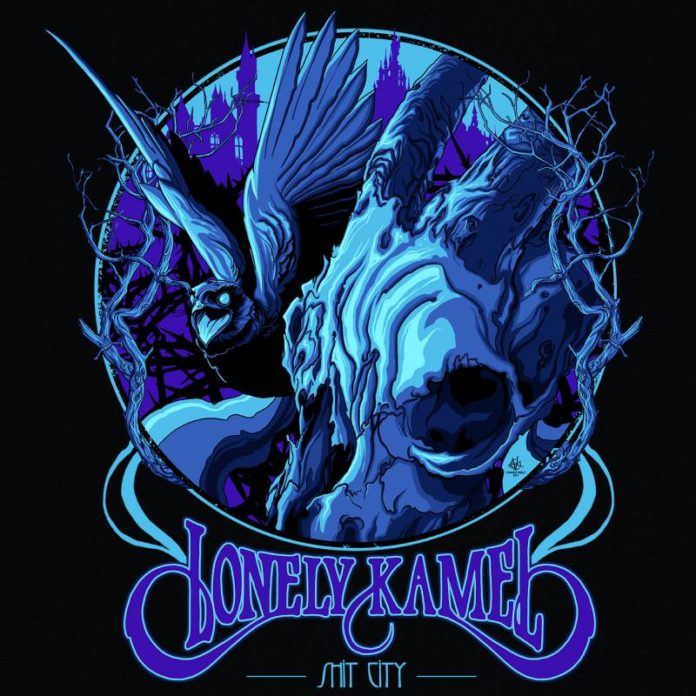 Stoner rock has often been considered an American invention, and indeed many of the first bands to be labeled as such were American; Kyuss, Monster Magnet, Fu Manchu, and Clutch were all stuck with the stoner rock moniker in the early 90’s. However, many trace the genre all the way back to one song in particular; “Sweet Leaf” by Black Sabbath has arguably been the most influential song in both the sound and lyrical content of the stoner rock genre. Keeping that song in mind, European bands playing stoner rock aren’t really that unusual, and indeed Europe has produced some of my favorite bands in the genre, like Orange Goblin, Spiritual Beggars, Kamchatka, and Truckfighters, and that’s really barely scratching the surface.

Lonely Kamel are a stoner band from Oslo, Norway that play a brand of stoner rock that incorporates elements from nearly every sub-sect of the genre. Stian Helle (bassist) and Tumblin Thomas (vocalist/guitarist) formed the band in 2005, wanting to combine their many influences, the biggest portion of which is the heavy blues and psychedelic rock of the late 60’s and 70’s. Shit City marks their 4th full length release, and it starts off fast and furious from the get-go. As soon as you hit play, “Shit City,” the title track, comes flying out of your speakers with an infectious energy. There is a ton of groove here, and just to show where the biggest source of inspiration comes from, mid-way through the song the music drops out and the sound of a bubbling bong comes in, closely followed by a slowed down version of the chorus riff, emphasizing the thickness of the bass and guitar tone. Tumblin’s vocals remind me of Chris Cornell’s, and there is enough twang in them to really give the blues aspect of the music a feel of authenticity. The third track, “Is It Over”, wouldn’t be out of place on any number of psychedelic/blues rock albums of the late 60’s or early 70’s, and there are hints of a little progressive rock as well. Black Sabbath seem to be a mandatory influence for just about anything hard and loud these days, and Lonely Kamel certainly have their Sabbath bits in there, with the slow, heavy groove on “Seal The Perimeter.”

Production on Shit City is clean and modern sounding, with reverb added to some of the vocal and guitar sections to give the tracks an aged sound; “Freezing” even has a mild flanger-type distortion to it, and really brings out Lonely Kamel’s psychedelic side. The mixing is a healthy balance of modern with some older production techniques, so you get a good solid up-front sound, and can hear everything clearly while style paying homage to the band’s predecessors. Finding that balance is never an easy task, and trying to give the music an old-school feel can often come off as gimmicky, or even a bit hoaky, but in Lonely Kamel’s case, it’s just what the doctor ordered. Tumblin’s vocals absolutely soar over the hyper-overdriven guitars and bass, and when the distortion gets added, it gives the tune another layer of psychedelic haze; again, the key here is moderation, and the vocal distortion doesn’t get overused.

Some time ago I gave a positive review to a similar album by Kamchatka, and I get much of that same vibe with Shit City. There are a lot of bands jumping on the whole retro-rock bandwagon, but what sets bands like Lonely Kamel apart is a feeling of genuine reverence for the bands that paved the way for them. Many bands are content to simply rehash some old Iommi riffs because it’s the cool and popular thing to do, and some are just cashing in on a fad, but you get the feeling that Lonely Kamel are simply paying homage to some of their musical heroes, while playing some damn good rock and roll. Shit City is a must-have for any fan of stoner rock that also likes to delve into the classics (and if you aren’t familiar with Lonely Kamel, their back catalogue is pretty solid as well). Mark my words, you’ll be hearing a lot more about these guys in the near future.

Call it heavy blues, stoner rock, hard rock, or do like I do and just call it awesome
Thick grooves, bluesy guitar lines, soulful vocals, and an excellent production that balances the old-school with the new
Not super heavy, so if you see the stoner moniker, and come looking for a band along the lines of Sleep, you'll probably be disappointed
5