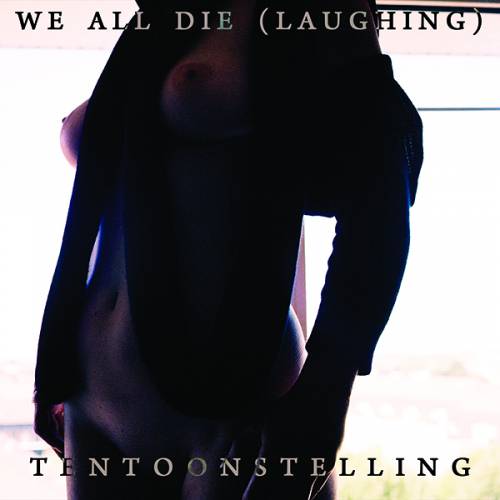 I have a problem with artsy fartsy things. I think that nowadays it’s easy to just pull pretty much anything out of your ass and call it “art”, safe in the knowledge that few people will dare to be the ones revealing that the emperor has no clothes. Although music often escapes the pretentiousness of modern art, from time to time it does get polluted with it.

Tentoonstelling is a split that serves as an example of what happens when someone has his head stuck so far up his own ass that he fails to see that his output is utter nonsense. The contribution by We All Die (Laughing) (hereafter “WADL”, because I’m not going to be typing that shit every time) is a fairly depressive, yet unremarkable, ambient piece inspired by their debut album Thoughtscan (under the title “Variations on the Scanning of Thought”, because if you’re going to be a pretentious asshole why not go all the way). It seems like a more melodic version of what Burzum did in Sôl austan, Mâni vestan, although WADL seem to have aimed at a conveying a feeling of claustrophobia and depression with their tunes, albeit in a very repetitive manner.

While WADL‘s piece (clocking at 13:49 altogether) might have some merit, the contribution by photographer Mathieu Drouet is pure, unadulterated, unprocessed, all natural, 100% organic, bullshit. As this release was made for one of his exhibits, his contribution, “Grande Plage (op. #1, movement #1): le noir”, is an audio rendition of “the photograpy digital file’s data”. In other words, this asshole grabbed the photograph’s metadata and decided to see how it sounded. You know, pretty much like changing the .jpeg extension to .mp3 and hoping for the best. The result are 10 excruciating minutes of noise. I don’t mean that in a figurative sense, like someone might call growling vocals or distorted guitars “noise”; I mean literally noise, static, weird sounds, and white noise. Why he thought that this shit deserved 10 minutes is absolutely beyond me, but I’m guessing being a French artist had something to do with it.

You should get this split if you’ve always been curious about what would happen if the shitty pianist at your local Marriott was dealing with depression (side A), and if you’ve always wanted to know what happens when the TV stops broadcasting (Side B).