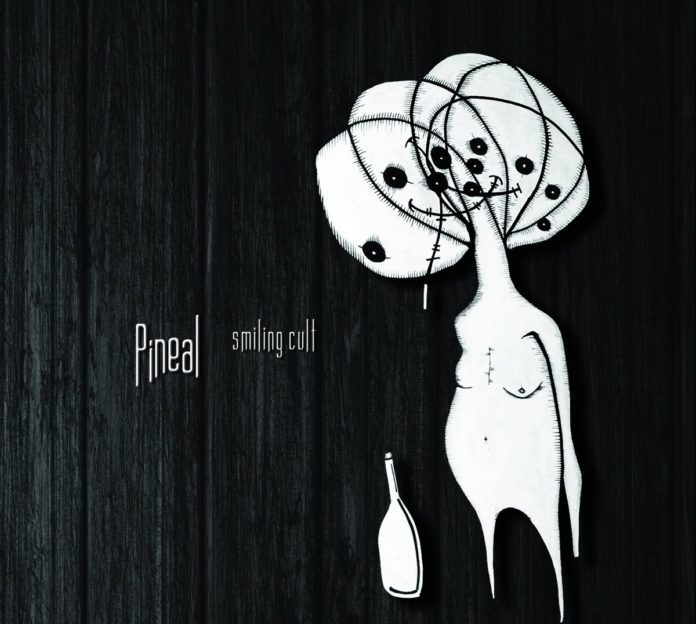 While prog rock’s roots may have flourished from the humble schools of Cantebury, the kings of modern progressive metal all hail from the land of bald eagles, freedom and apple pie. Still, recently there have been some bands seeking to bring prog back to its spiritual home, while keeping the contemporary nature of US prog bands, such as Bossk, Light Bearer and now, Pineal. Based in London, Pineal are a three-piece prog metal powerhouse that draws from the tutelage of, among others, Melvins and Tool, channeling the sleaziness of stoner and sludge with an oppressive, bleak atmosphere. Following a promising demo released earlier this year, their debut EP, Smiling Cult, sees them taking more influence from the North American side of prog, as well as some of metal’s distant relatives.

One of the most striking things upon first listen is the almost (almost) throwback mood of the record. Smiling Cult has a particularly 90s feel, embodied by the slow, crawling pace of many of the songs and the fuzzed-out, jagged riffs held together by thick, bulky bass. It all feels like it’s coming from a parallel universe where grunge never evolved into whiny, inoffensive radio rock, and embraced all of its dark, abrasive and sinister elements instead. Some of the riffs and guitar work call even further back to post-punk acts like Slint or Killing Joke, with the intentionally awkward, stumbling riffs lurching forward like a convict in a drunken stupor.

As impressive as it is for a debut, Smiling Cult is not the most ambitious record, playing it a little too safe and feeling confined within the conventional structures of metal as a result. That said, Pineal‘s focus on conveying atmosphere over the self-indulgent decadence and showboating of so many modern prog bands is commendable, feeling like more of a fusion between the sensibilities of post-metal and the musicianship of prog. Pineal are definitely a band to keep an eye on in the UK scene right now, and I’m seriously looking forward to how they develop their sound in the future. These guys could be huge.

Argus – Beyond the Martyrs