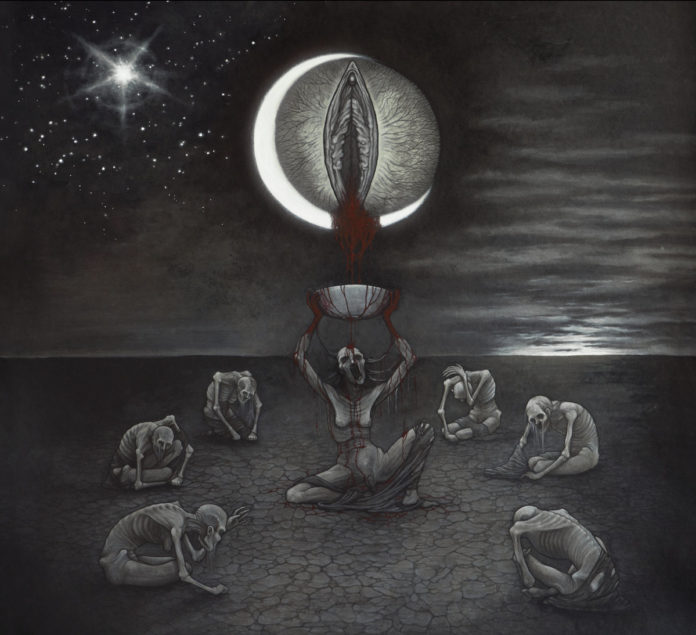 What an amazingly over-the-top cover art. A hairy vulva dripping blood into a ceremonial vase held high by a Gorgon-like creature (with both a penis and breasts), surrounded by emaciated people who seem to be cowering in fear, as a pentagram star shines in the distance. You gotta love heavy metal.

For a black metal release, Relinquishment offers a lot of variety. There are plenty of doom and progressive moments scattered throughout the album to keep things from becoming too repetitive (as it is often the case in black metal). The different progressions are perhaps the most remarkable part of the album, as they show Ordinance‘s ability to move away from the more traditional aspects of the genre and try new things. The occasional use of clean guitars is an interesting element, and I’d love to see more black metal bands trying it; Ordinance demonstrate that they can be used without taking away any of the aggression and darkness that they wanted to keep in the music.

Lyrically things are quite reminiscent of Mayhem, maintaining a very low-pitched growl throughout the songs, which although at times becomes a bit tiring (the musical variety does not seem to apply to the lyrics) works well in the setting of this record. As the saying goes, “if it ain’t broke, don’t fix it”, and if this style works for Ordinance, even at the cost of occasional monotony, there’s no reason to change it.

Production-wise, Relinquishment fails to live up to the quality of the songwriting, and although it manages to avoid a cacophonous sound by mixing the instruments in a competent manner, everything sounds distant, as if it was a poorly compressed digital file. There are some sound effects added her and there, like some bells tolling the distant and some choral chants, that do contribute to the overall feel of the album instead of becoming a distraction, and were an interesting little thing  to pay attention to.

Relinquishment shows great potential, and I’m looking forward to see what Ordinance are capable of. I can only hope that next time around production will be of a higher quality.