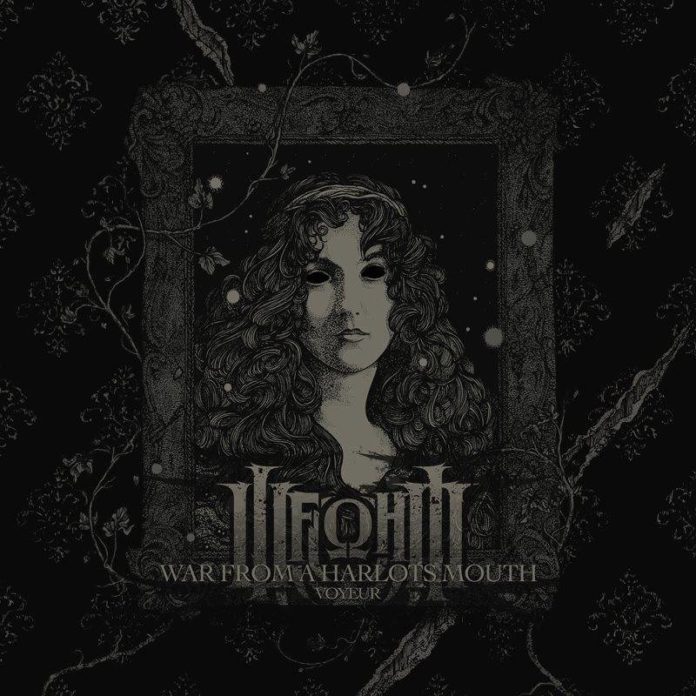 You know, sometimes you’ll get an album that’ll genuinely surprise you. Maybe you didn’t like any of the bands previous works, or maybe you’ve only heard of the band but have never listened to them before. War From A Harlots Mouth, for me, was in the latter category. A name I’ve always heard bandied around the metal world, but never took the time to stop and listen to.

Their latest album, Voyeur, pretty much makes me wish I never took the time to do so.

From the beginning, Voyeur fails to impress. War From A Harlots Mouth tries to blend elements of Tech-death, Math, and metalcore together. The end result? A big pile of mush. Songs on the album feel wholly uninspired and surprisingly lethargic in nature, something that’s a big problem for an album that is heavily influenced by tech-death. In fact, a lot of the songs on Voyeur are so slow in nature that they just become plodding and…really fucking boring. Two songs near the end of the album really exemplify the problem, “Krycek” and “Scopophobia” run back-to-back and just feel like one big song instead of two. This happens throughout the length of the album, and it really, really drags it down. The pace feels all off, songs feel longer than they should, the works. The album clocks in at just over a half hour long; but it feels almost double that. Yeah, it’s pretty bad.

The few moments where the music starts getting interesting are all too brief. It almost makes things worse; because you’re just sitting there going “Why couldn’t the whole album be like this?” and then before you know it, you’re back to generic riffs and drums that are almost indiscernible from one another. Vocals are okay, but unfortunately that’s about the highest level of praise I can give to them. Nothing really stands out on Voyeur, and that’s it’s main problem I think. Something is just begging to grab the spotlight – crazy riffs, intense drum fills or footwork, something. Alas nothing does, and the album just falls flat in almost every regard. At least the production is okay – although keeping in theme with the album nothing spectacular; there are times when the album sounds like it lacks punch and could have used a little more *oomph*.

Just when you think you’ll start enjoying the album, it comes crashing back down to earth. When the track “H(a)unted” came on, I thought that was it. That was the moment where I would start getting into the album. A 41 second song that oozed grittiness, energy, and was catchy to boot. “Terrifier” came on after that, and I was transported back to reality. Yet another slow burn song that didn’t feel satisfying or memorable. Oh, and there’s also an opening track and various intermissions that just sound cheesy as hell. If the album was filled with good songs, it would almost be sort of endearing. Instead, it’s just an album filled with bad songs and cheesy intermissions. Maybe their previous albums are better; but War From A Harlots  Mouth certainly didn’t catch my attention with Voyeur.