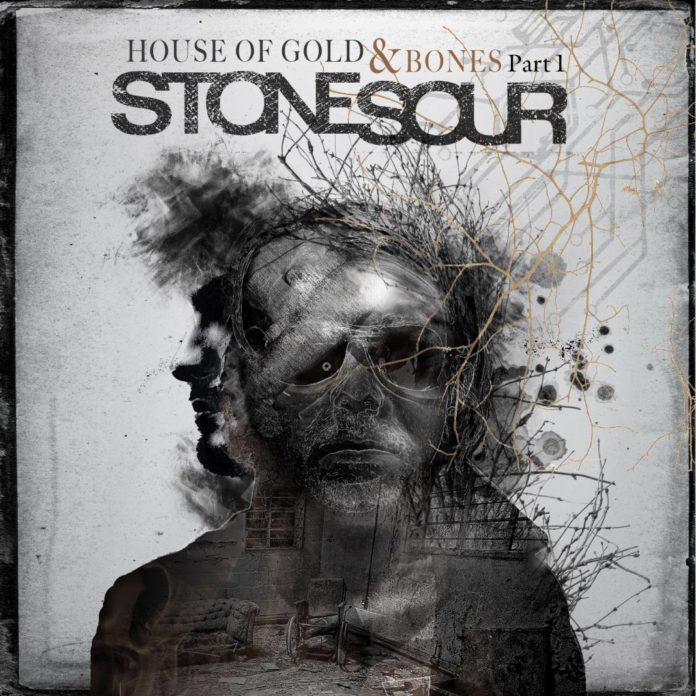 It’s been a turbulent two years in Stone Sour’s career, related to the two of the band members’ main band, Slipknot. The death of their original bass player, Paul Grey in 2010 and their subsequent return to the stage would have thrown everyone else off balance, but Corey Taylor, Jim Root and Co. are back with Stone Sour‘s fourth studio effort, House of Gold and Bones, Part 1. This release is the first part of a concept duo, its sequel scheduled to hit the shelves early in 2013. It follows a story written by Taylor, about a young man standing at the crossroads of his life faced with a life-changing decision: grow-up and accept the responsibilities or remain a carefree adolescent. The music follows the story too, and although the pace of the record is pretty fast for the most part, the songs have a dark, melancholic feel to them.

The first few minutes of the record show that the band has gone a long way from their nu-metal roots. Instead, the record is driven by whole new hard rock energy that sounds elate and most importantly, pissed as hell. The first track (also the first single of off the album), “Gone Sovereign,” is a show of this new force behind Stone Sour. A heavy track in the vein of Avenged Sevenfold, that actually reminds a lot of their younger colleagues’ style with the heavy riffs, catchy, nasal vocals and impressive guitar solos and harmonies. There are also a lot more grunge elements involved, and one cannot miss the strong Alice in Chains influence on “Absolute Zero” (the second single of off the record) or “Influence of a Drowsy God.” The string arrangements in “Tired” go hand in hand with Taylor’s outstanding and moving vocal performance, especially during the chorus of the track. And speaking of moving, you can’t miss “Taciturn,” an amazing ballad that stands side by side with tracks like “Bother” or “Through Glass,” but also takes the style a level further in terms of songwriting. The only two tracks that somewhat remind of Slipknot or Stone Sour‘s self-titled debut are “RU486” and the bass driven, final track “Last of the Real,” that features aggressive semi-growls and metalcore-style bridge and chorus.

The overall impression I get from this record is that the band has gone a long way and developed a lot in terms of songwriting and overall performance. They are not afraid to try out new stuff, as the Somewhere in Time inspired Maiden harmonics that carry the weight of the emotional, “The Travelers, Part 2;” and at the same time dare to go back all the way to their roots, like in the two aforementioned Slipknot-like tracks. In terms of production I can offer nothing but praise. The subtle vocal layers add extra spice to each and every one of the tracks, the guitars are much more classic heavy metal inspired and the bass, played by Rachel Bolan (Skid Row), has a thick and groovy sound that provides the solid foundation for the record, along with superb drumming by Roy Mayorga (ex-Soulfly). The album leaves me yearning for more, hitting repeat time and time again, and hoping that the time between this one and the release of its sequel passes as soon as possible.

House of Gold & Bones, Part 1, is without exaggeration a contender for the album of the year. It is a fresh and inspired record that takes Stone Sour to a whole new level and in time might prove to be the album of this band’s career.

10 Steps to a Healthier, Happier Life in 2014 | athicketofmusings