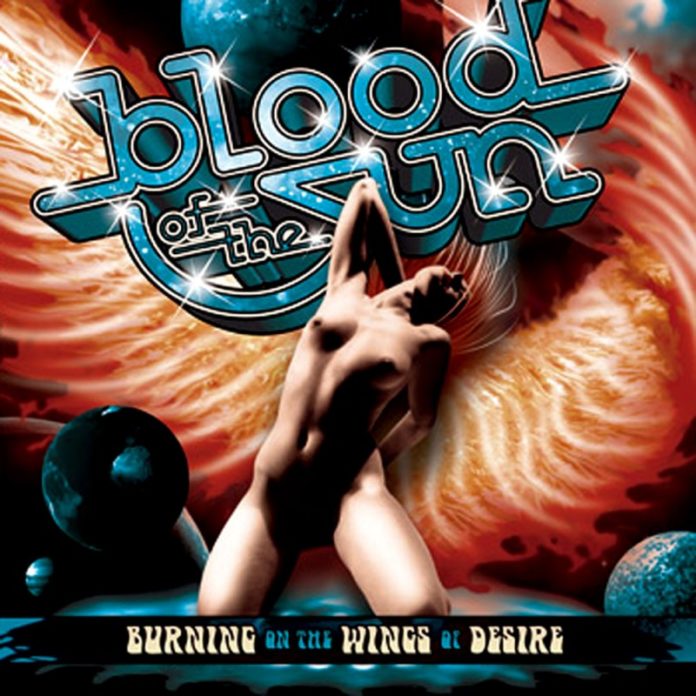 Sometimes there can be albums that grow on me, slowly, little bit by little bit they infest my mind like a mid 13th century bubonic plague. Others, like Burning on the Wings of Desire don’t take nearly as long, within fractions of a second I can tell I’m going to be immediately hooked.  For the 3rd or so time this year, listening to a particular album has felt like a respite, a bit of a sabbatical if you will. There’s just something about late 70s inspired metal that gets your groove going on. Whether it’s the mix of dirty bass, howling Hammond B2 organs, or the soaring vocals, Blood of the Sun have found a potent mix that pleases on more levels than a mid range Taiwanese street walker.

Without a doubt, this has got to be one of the most fun to listen albums of this year, and the ironic thing about all of this is that it so reminds me of the much panned Never Say Die. Though the (at best) niche Black Sabbath reference hasn’t gone unnoticed, it makes me scratch my head in puzzlement. This has got to be the first time I have ever heard that album spun in a positive light. But whether or not the comparison was purposeful, it’s there no less. It may just be my ears though. Then the vocals kick in…yeah, this guy is definitely channeling some sort of Ozzy/Van Zant mix. The channeling of spirits past sure doesn’t stop there; Blood of the Sun’s use of the long forgotten pre-chorus really throws back to the decades of music’s past; we’re talking heavy Deep Purple and Lynyrd Skynyrd influences here. I’m definitely not complaining

At times boogie woogie, at times slightly NWOBHM, at times whatever the hell Wolfmother is,  Burning on Wings of Desire lances through energetic rock tracks one after another and doesn’t let up. Once the pianos get going, there’s no stopping them. What really makes this album a standout LP though is the progressive attitude towards song writing; never once did Blood of the Sun shy away from using a different style, double bass where double bass needed, cowbell when cowbell was needed.  Everything is expertly done. By no means is this band here to fool around; as apparent by the old school musical freakouts, this is a musician’s band, expertly weaving riffs as tasty as a cold brew on a Christmas morning.

The production quality deserves a nod too. There’s certain members of bands (four strings low end note players for example) that don’t get this much loving that often, but love it when the do. One thing I do know though, is that it’s really easy to get things “lost in the mix” when you’re dealing with warbley piano parts and the such; they sometimes interfere with bass drums or even ride cymbals, no need to worry though, unlike that puppy you lost at 7 years old, it’s all here.

If you’re content listening to the same old boring throwdowns, brown note guitars, vomit style guttural vocals, and ironic 90’s inspired fashions, go ahead. The rest of us will be riding a flaming wild hog into a beach party at the fiery mouth of hell.