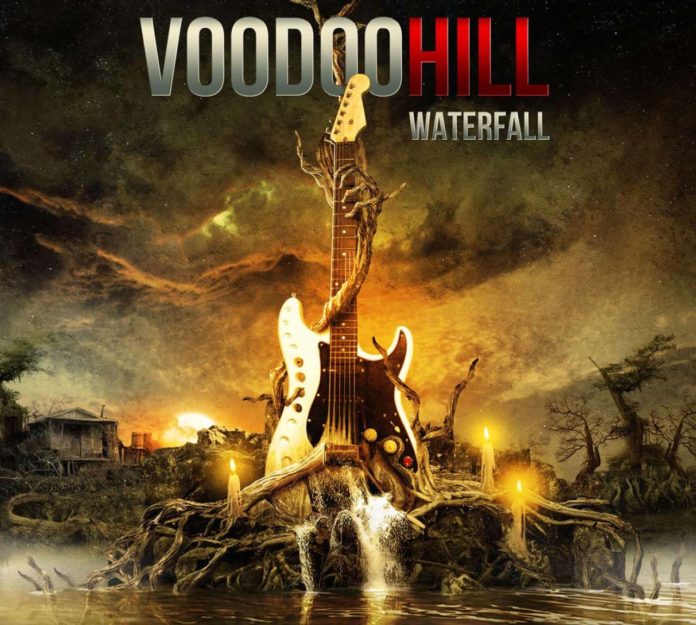 This is the third album from Voodoo Hill, a band consisting of guitarist/front-man(/producer) Dario Mollo and vocalist Glenn Hughes (formerly of Deep Purple) with bassist/keyboardist Dario Patti and drummer Riccardo Vruna rounding out the core, and an extra drummer and bassist brought in for a few tracks. I could give the names of those guest musicians, but it would just be a further procrastination to avoid having to talk about the music contained here. And while continuing to put off that discussion would be quite nice, it doesn’t make for much of an album review.

To put it bluntly, this is the sort of music that was embarrassingly out-of-date back in the ’90s, a blustering and cocky vein of rock with little to declare beyond making sure people are aware of how much it rocks, peppered with a few ‘spiritual’ power ballads to suggest depth. The guitar wankery and cinched-scrotum style of singing, while done about as well as you could desire from this sort of thing, don’t seem to have grown (or, for that matter, seem to want to grow) beyond the arena hair metal of the mid-’80s, and more than a few of the tracks could pass for Spinal Tap having a day with lower-than-usual self-awareness, a focus on technical noodling, and no desire to give anyone but the frontmen interesting riffs. It’s like the Marty Friedman/Jason Becker band Cacophony, which was unabashedly all about the guitars and frontmen (Hell, they even got their names slapped on the cover side-by-side like it was an action movie’s poster), but with the timeliness and innovation torn away and nothing new to fill the hollows.

On the upside, the cover art warns you what you’re getting into, and there are enough cool riffs in the album for some enterprising musical editor to cut together a single interesting instrumental track. The playing isn’t particularly bad, on the face of it, it’s just that everything good is so buried by posturing and expired ideas of coolness that the parts which do work don’t have a chance to breathe or grow. I mostly feel sorry for the bassist and drummer, as it makes sense to kick in with two guys who have dozens of well-respected associated acts in their history, but they now have their names attached to something so painfully lame. Hopefully the pay’s good.

Listening to Waterfall you may wonder what kind of time capsule these guys spend their time in to avoid getting anything more modern than some glossiness to the production involved. You may also wonder who their target audience is (I know that thought’s been running through my mind since the first track finished). Are there people out there who feel Dragonforce is too wild, Yngwie Malmsteen too hard, and for whom records from past decades, regardless of how little difference there is in content, just won’t do? Judging by this album, even if that audience doesn’t exist, there are bands and labels praying that they’ll spring into being.

IN A NUTSHELL
Avoid it, unless your taste in music is geared to 'so bad it's good,' or you're looking for background music to play at the mid-South US bar where you work.
POSITIVES
Technical skill, under an hour in length
NEGATIVES
Mired in decades-old habits with little freshness to be heard, lyrics so cheesy you can almost smell them
3