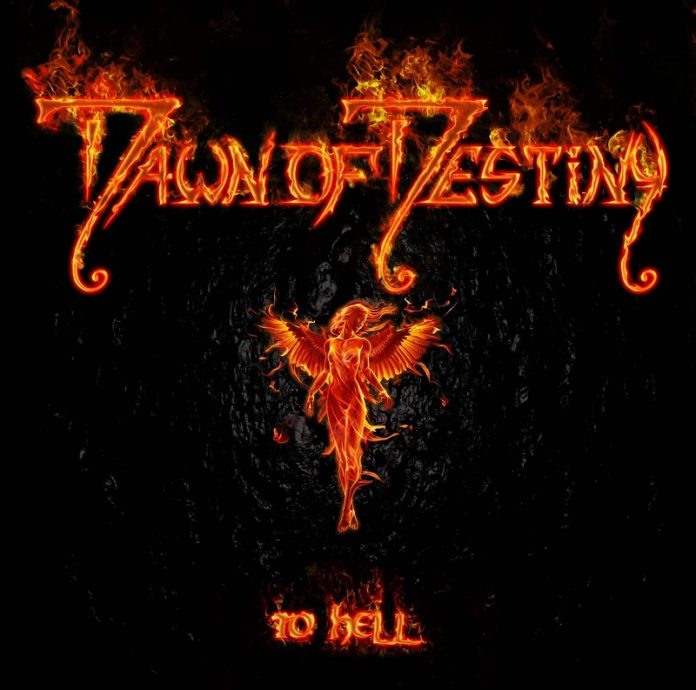 To Hell starts off strong with a sinister edge in the tone and the feeling of a crushing weight building up. Heavy guitar work that transitions back and forth from a slow trudge to a fluid groove accompanied by vocals that range from guttural lows to operatic highs, all help to construct the atmosphere of expectation. There seems to be a lot of influence from the likes of Accept circa Blood of The Nations in the tempo and use of group vocals and chants. Most importantly, while there are both male and female vocals, the female side doesn’t get slotted into an exclusively operatic tone with a heavy focus on technical ability, instead taking on a complete range of sounds, outshining the male vocals in every way.

Unfortunately, To Hell falls victim to the fear of leaving anything on the cutting room floor. If the album had been seven or eight songs, it would have been the perfect length as just about every song clocks in at five plus minutes. There are fourteen tracks here, a fact that bloats the whole performance to epically uninteresting proportions. At least half of the album is unnecessary, as there are no new concepts presented and there is very little energy in the sound; this makes me wonder how the band expected people to stay awake for their performance while it sounds like they themselves were falling asleep at their instruments. Also, there at times when the female vocals are practically phased out of the music, despite them possibly being the most interesting aspect of the whole performance.

Thematically, the album is apparently about a couple on their honeymoon and the bride has some dark past involving a strange tattoo and a daughter that died in a fire. To say the least, the story is less than compelling and takes a toll on the lyrical content with the word, “love” being overused to a criminal extent. Then again, maybe the title To Hell actually reflects the band’s view on marriage, in which case the whole thing may actually be a cutting satire – kudos to them if that’s the case.

There is some quality and worth to be found in To Hell, but it is buried under a mountain of sound that takes some considerable effort to sit through. Obviously it should not be a challenge to sit down and listen to music, but Dawn of Destiny have found a way to make it happen. To Hell is the poster child album for why cutting and editing is essential in the creation of music.

IN A NUTSHELL
Half of it is great, the other is unnecessary
POSITIVES
Excellent and diverse vocals.
Moments of solid and exciting playing.
NEGATIVES
Too much fat that needs trimming.
Hard to sit through/low replay value.
2.5