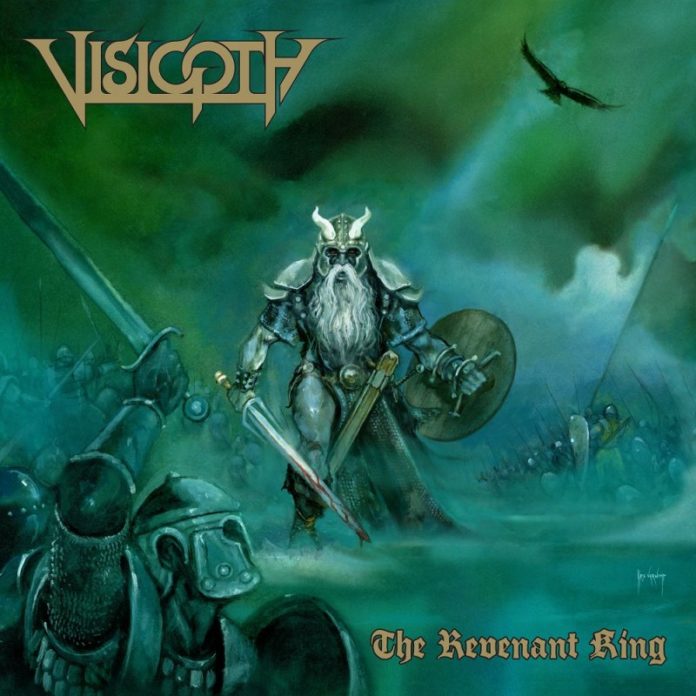 There is something to be said for bare bones, back-to-basics performances that manage to produce a unique and creative sound despite the rudimentary tools used in their conception. Staying true to tradition to an almost fanatical degree, Visigoth come forward with their first full album, The Revenant King which, in spite of its time tried methods, still provides a fresh listening experience.

The Revenant King is, for the most part, a slow, lumbering beast of a record with a lot of kick. Stylistically, it is most comparable to the likes of Grand Magus, producing an almost ancient feel in the sound through the fat and heavy guitar work and primordial percussion accompanied by moments of stoner doom that conjure thoughts of Black Sabbath. In contrast to the mammoth instrumental, the vocals have a soaring range traveling from operatic lows to Rob Halford highs. The stark differences between the vocals and instrumental only works in the band’s favour thanks to an excellent production that highlights the strengths of both sides, combining the two flavours without leaving a sour taste. Visigoth also do not fall into their slower tempo and stick to it; instead they interweave faster, pulse pounding portions that get the listener fired up before diving back into the towering sections making for an unpredictable experience.

While there is a lot of strength in the performance, there is also a lack of development and interconnectedness between the songs. Sometimes it feels as if the band had written down a bunch of cool ideas and then made each song as an intro for each concept. This isn’t a bad thing on its own, an awesome idea is an awesome idea, but I would have liked to have seen them expand further on their concepts and explore the worlds they briefly created. That being said, the average song runs for a meaty 6-8 minutes without feeling unnecessarily long or boring, so while it may not be an album’s worth of content, there is still plenty of time for the ideas to be fleshed out, at least to some extent.

Overall, Visigoth deliver a crushing performance with a lot of spunk and energy that keep things interesting throughout the winding length of The Revenant King. There are some short-comings in the flow and direction of the album, but considering it is the band’s first full length, it is forgivable. For those looking for a new band that sticks to the traditions of heavy metal, Visigoth is right up your alley.

Reader Rating0 Votes
Exciting, powerful, and unique sound with an excellent production.
Many ideas are undeveloped.
4.5