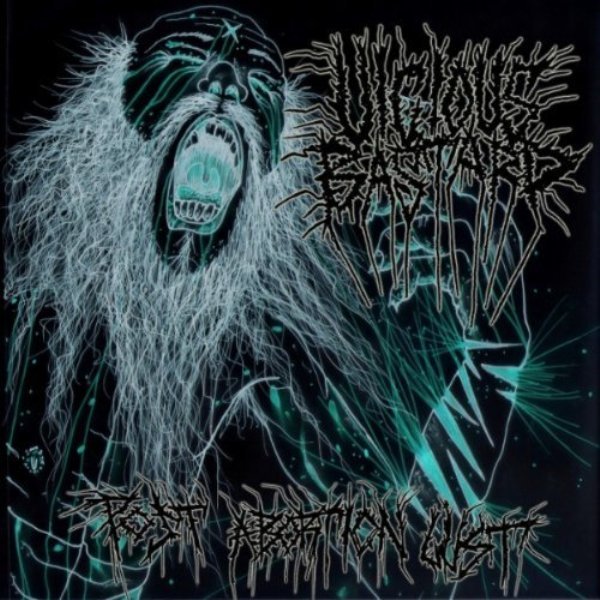 When a band names themselves Vicious Bastard, you know there is only one reason for their existence.   Can you guess what it is?  If you guess to bring the world fast and violent grindcore with a modern twist to it, then you would be correct.  Boasting members of Malevolent Creation, Venemous Concept, and Anaal Nathrakh one would think that they would certainly be capable of writing an album that utterly reeks of despair, violence, and genocide.  The bands debut, “Post Abortion Lust,” puts those assumptions of ours to rest and repeatedly kicks your teeth in for over 24 minutes with pure unadulterated and grinding hate.

Once the record begins it is absolutely impossible to deny the influences of both Anaal Nathrakh and Napalm Death in the music.  It is as if the band listened to Anaal Nathrakh‘s last few albums and specifically concentrated on the grindcore passages they would splice into their eerie tales of Armageddon, because that’s what this album feels like: Anaal Nathrakh if they were a straight grindcore band with Mitch Harris (Napalm Death, Defecation) on lead guitar, minus the myriad of haunting clean vocal choruses.  There’s also a smattering of groovy death metal riffs in the music, too, helping the record move along in different parts when you might think the grindcore edge is wearing a bit thin.  Even the bass is very reminiscent of Shane Embury (Napalm Death, Venemous Concept), giving it that very bottom-heavy tone and smacking us in the temple with a sledgehammer.

The mixture that Vicious Bastard brings in “Post Abortion Lust” works very well, making sure to give us restless grinders what we want in straight-forward songs like “The Grand Slut”, “Baptised In Shit”, “Obsolete”, and “Inside We Decay” to snap our necks to.  They also have those groovy death metal riffs and punk influences spit in our faces with some slightly slower jams in “Crushed Under Foot”, “Fermented Dementia”, “Chewed Up, Spat Out And Begging For More”, and “From The Smoke (Came Locusts)”, which is easily the longest song on the record.  The songs last typically from 30 seconds to 1:15, but what is so great about it is the songs end just at the perfect times.  You’ll find yourself wishing for the songs to be longer, and it’ll finish.  But, your unused concentration is quickly dispersed to the other tracks, making sure to keep you engaged throughout the entire listening experience.  Even the production mirrors both of those bands, giving the classic grindcore song structures the extra strength it needs to really keep us wanting more.

The influences of Anaal Nathrakh and Napalm Death certainly don’t stop in just the instrumentals in “Post Abortion Lust“.  Oh no, Vicious Bastard were even able to convince both Dave Hunt (Anaal Nathrakh, Benediction) and Mark “Barney” Greenway (Napalm Death) to lend their aggressive vocal talents on the record, as well.  You can immediately hear the loveable Barney just yelling during “Stump”, setting you up for the lethal ambush, and after the 35 second bombardment, all you hear is Barney yelling at you, and it sent chills down my spine.  Dave’s contribution seemed to be specifically crafted for him in “Cunt Nulis”, as it sounds exactly like one of Anaal Nathrakh‘s legendary blackened grindcore passages with his deafening screeches behind it.  It’s obvious that both men have a large influence in the music itself, but it is a whole other monster to be able to have them throw down on tracks themselves.

“Post Abortion Lust” is pure United Kingdom-inspired grindcore.  I can tell this group of beasts will be telling the whole world not to discount them from the war on the music industry where grindcore is the weapon of choice.  Vicious Bastard will be right there ready to destroy all that stand in their way and delivering a powerful punch all at the same time.  There is absolutely nothing more to say, so do yourselves a favor and pick up “Post Abortion Lust” immediately.