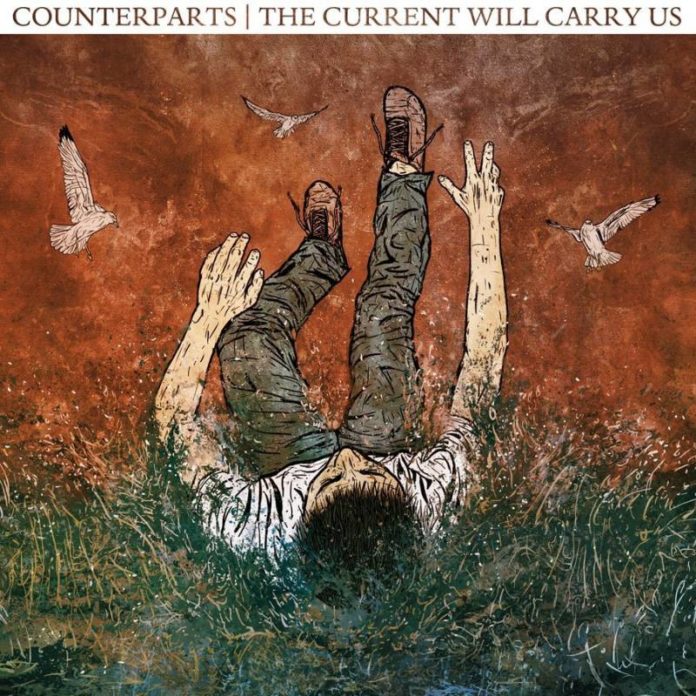 With their sophomore debut, Counterparts manages to put out an album that not only matches their debut in terms of intensity and raw-emotion – but also manages to pass it both in terms of musicianship and consistency. I’m sure the bosses at Victory are happy with this one – if they haven’t hit it out of the park, they at least got to third base.

Counterparts The Current Will Carry Us brings you through a journey of a man seemingly at war with himself – while also lashing out at anyone who comes too close. Lyrically, it deals with themes of self-doubt, heartbreak, and loneliness; and for the most part it does a remarkable job of not coming off as pretentious babble or having any eye-rolling verses that a lot of albums that deal with similar kind of content do. For this alone, Counterparts deserves a pat on the back. Vocalist Brendan Murphy’s heartfelt screams never feel forced, and rather sparse clean-singing sprinkled throughout the album helps break up any monotony that might come from nearly thirty-five minutes of constant battering of the ears.

Perhaps the best thing about this album though is the dynamics at which they play –they certainly aren’t a band that goes full force 100 percent of the time, and in this case that’s a good thing. Furious riffs and pounding drums often give way to soft melodic instrumental passages that are more often than not, super catchy and a great way to build upon the atmosphere that the albums lyrical themes set in place. Rarely do you find yourself wishing for a song to end or checking to see how long you have left (which let’s admit, almost always leads to you hitting the skip button anyway), it’s a very easy album to listen all the way through which is always a good thing in my book.

If you had to pick one thing that stands out from this album, it’s how good all the instruments mix together. They never seem to overpower each other; everyone clearly has a defined role and work together to create a sound that few other bands can achieve. The way the instruments work and play off one another creates a sense of loneliness within itself, achieving an affect that only serves to empower the lyrical themes placed strategically throughout the album. The openings to “Reflection” and “Pedestal” are great examples of this, as are the various instrumental interludes that are heard during the course of this 35 minute adventure. If you listen closely enough behind the riffs and drums, you’ll often hear a guitar or the bass noodling about in the background adding an extra layer of sound on top that is always done tastefully and never over-powers the underlying song. It’s small details like this throughout The Current Will Carry Us that make this very good album.

Essentially Counterparts ripped a page out of Misery Signals Controller book and created an album that was as much about the music as it was about the mood and vibe it throws out at you. This is not a bad thing at all, and is frankly an area that can still be explored in hardcore/metalcore music without seeming contrived and trend-hopping. The Current Will Carry Us takes everything that Counterparts debut album Prophets did and does it better, while also adding an extra layer of polish on top and avoiding some of the problems Prophets had with consistency. There is nothing ground-breaking here – if you want to see this album done better, go listen to the aforementioned Misery Signals Controller – but this album is damn promising for such a young band. If you’re a fan of this type of music, it should get a regular rotation in your playlist, and they are definitely a band to keep tabs on going forward.