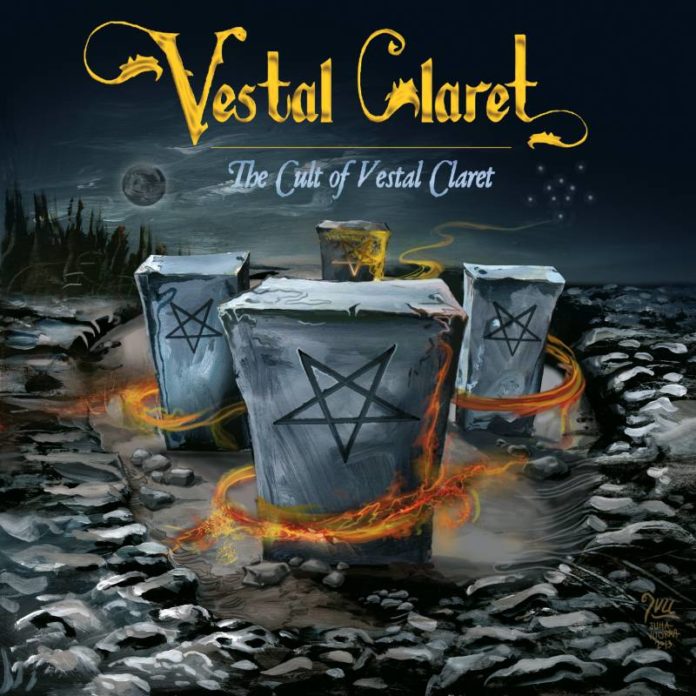 I shy away from using the term “clone”. To me, it’s always been a bit of a cop-out when talking about music. Almost every band, if you really listen, has their own unique take and brings something new to the music world in some way. To refer to a band as clone implies that there is no progress, no unique ideas, no unique combinations: that everything they present is exactly the same as what their predecessors brought forth before. There are, however, a few bands I’ve heard that can only be described using that term.

To say that Vestal Claret sounds a little bit like Ozzy-era Black Sabbath would be a massive understatement. Heavily distorted riffing that never exceeds mid-pace, swing-inflected drum grooves, dissonant, vaguely nasal vocals, they’re all the hallmarks of the early Sabbath recordings. The thing is, there’s nothing that I could here to set these Americans apart from their British ancestors. There’s no new slant on the formula, no unique strains played in these recordings. It’s like listening to b-sides from Master of Reality.

Philip Swanson is a dead ringer for Ozzy Osbourne, right down to how the final syllable of each phrase tapers off. The comparisons are audible, well, everywhere. But the best example is in the album’s title track, where the occult lyrics ring out as if being spoken by a dark preacher from his pulpit. Or, if you will, like a prince of darkness on his throne.

Simon Tuozzoli channels no influence besides Iommi. Even down into the solos, his lead work is minimalist, free of flash but full of distortion and electricity. He’s clearly a great player, and one who knows how to craft solos that serve of the song. If there’s one thing that every doom band needs to copy from the riff master, it’s certainly be that. But, it’s still all the same thing. That sameness is further Exacerbated in Tuozzoli‘s bass guitar work, which is bouncy and jazzy like Geezer‘s. It’s not hard to imagine Mr. Butler bobbing his mop of hair playing these songs. It’s all just Master of Reality and Vol. 4 ad nauseum.

It’s not bad music. In fact, it’s created in the fine tradition of one of the greatest bands to have ever walked the earth. But it brings nothing new, nothing of its own, to the table. These guys are straight-faced Sabbath clones, even doing a cover of “Who Are You?” from Sabbath Bloody Sabbath. For music, especially Metal, to remain vital, it has to explore new realms of possibility, bring in new influences and strands of creativity. Uniqueness and invention is a necessity, and it doesn’t mean that every band needs to reinvent the wheel. It just means that every band has to be themselves. There is only one Black Sabbath. Vestal Claret, try as they might, can’t change that.