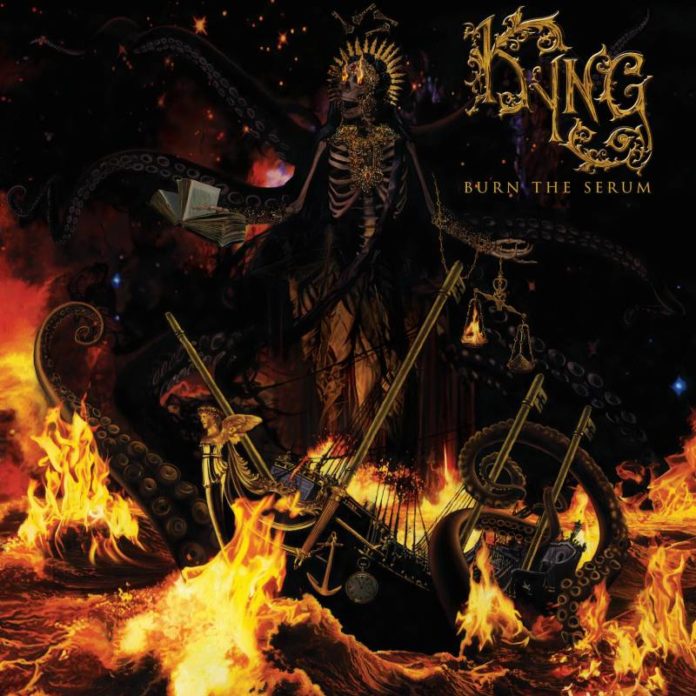 Kyng are a band whose name I’ve seen mentioned a lot lately in the stoner rock/metal underground, having toured with such heavyweights as Megadeth, Trivium, Clutch, and The Sword. They were even handpicked to play Metallica’s Orion Music + More festival, and have garnered praises from Loudwire and Ultimate-Guitar for their debut full-length, Trampled Sun. With a pedigree like that, I listened to Kyng’s new record, Burn The Serum, curious to see what all the fuss was about, especially being a fan of stoner rock as well as their tour mates.

Burn The Serum has all the ingredients to make them a massive success. The record starts off pretty promising, with the title track thundering in with all guns blazing; guitars, bass, and drums are massive right from the very beginning, and the song sounds like it could have been a cut on any album by The Sword. Although “Burn The Serum” is a great choice for an album opener (it will pump your adrenaline and have you turning the volume up) it also sets the bar really high, and the rest of the album just doesn’t live up to it. Oh, there are riffs-aplenty throughout, and some really killers tunes that make a valiant effort to recreate the excitement created by it but it’s just not enough. “The Ode”, for example, starts off with a down-tuned, crunchy riff that gallops like a warhorse sprinting into battle, but then it is dragged down with a chorus that goes into radio-rock territory, sounding like it belongs on your local “modern rock” station. In fact, that’s the story on most of the album; occasional cool riffs get followed by chord progressions and melodies that sound more like a slightly heavier Shinedown, or whatever band is the current “post-grunge” radio titans.

Guitarist/lead vocalist Eddie Veliz has a voice that was totally destined to be in a popular rock and roll band; it’s clean, friendly sounding, with just enough grit to make the headbangers in the audience go “hell yeah.” He and bassist Tony Castaneda do the kind of vocal harmonies that fans of Hinder, Three Days Grace, and any number of other radio darlings will love, and they’re actually a big part of the reason why Kyng will probably get a lot of success. Don’t get me wrong, this album has moments that absolutely rock, and the production is excellent, having been recorded and produced by Andrew Alekel (responsible for such notable acts as Foo Fighters, Queens Of The Stone Age, and No Doubt). The instruments are huge, the vocals soar, and the artwork is pretty killer, but the overall vibe is just a little too polished, a little too commercial. There are hints of classic 70s rock that show up every now and then, but these are mostly seen through the filter of other bands that have also scoured the goldmine of Black Sabbath and Led Zeppelin riffs, and the tunes you get just feel all too familiar. There are only so many ways you can do the standard loud verse, poppy sing-a-long chorus, with a heavy break formula before it’s just a copy of a copy, and I feel that’s the case here.

Even though Kyng will most likely be selling out stadiums, and although they’ve been making a lot of waves in the rock and roll world, I was left feeling disappointed with the finished product. There are moments of greatness that get marred by commercial rock tropes, and it just leaves a sour taste in my mouth. They are undoubtedly talented, but I’d like to see a bigger effort in being more original, and take loud guitar rock in a more exciting direction. Kyng will find themselves a huge audience among fans of the louder bands on the radio, who will certainly want to get a copy of Burn the Serum. Too bad I’m not one of them.