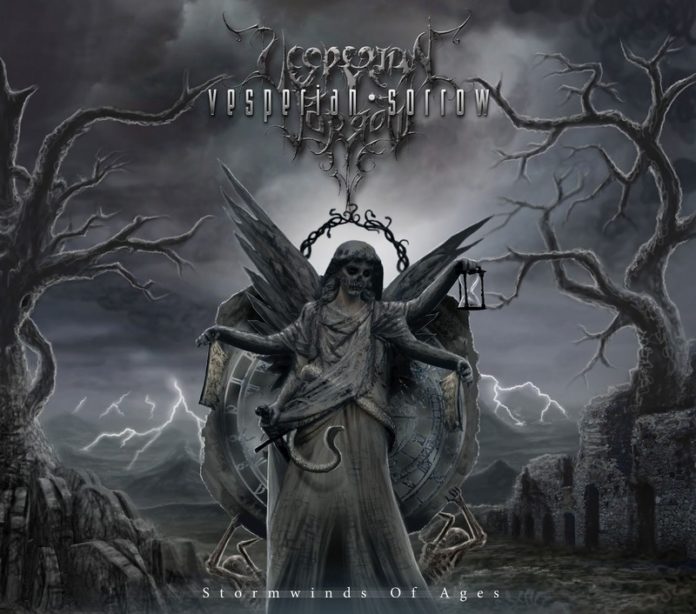 This album is a study in epicness; everything about it oozes things larger than life; the guitars, the reverb, the vocals, all throw in their weight behind Stormwinds of Ages to make it as grand sounding as possible. Unfortunately, while Vesperian Sorrow tried to make something on the scale of the Iliad, Dante’s Inferno, or the Tales of Gilgamesh, they came up with mixed results, landing somewhere in between the Hobbit and Percy Jackson.

It’s easy to see what Vesperian Sorrow were going for with Stormwinds of Ages; one can easily imagine the intention of this album being the soundtrack to an epic battle the size of Helm’s Deep or the like. But, it immediately starts off on the wrong foot; the intro track is a “Sanguis Vitam Est” should be renamed “Hic Carmen Leviculus Est” (This Song is Silly). First off, is there any reason for the title to be in Latin? No. Secondly, the track itself is laughable; a quick clip of winds building up and someone shouting “Winds!” over and over. I can only surmise that this is supposed to be a cleric or mage of some kind brewin’ up this storm but, rather than sounding like Gandalf, or Moses when he parted the Red Sea, it sounds more like Harry Potter’s drunken uncle who cant get his wingardium leviosa spell to work.  Thankfully, it’s a mistake never repeated on the album.

As we move one, the album actually gets better; Vesperian Sorrow let the songs speak for themselves. Sonic quality wise, they sound like a mash up of Behemoth, Cradle of Filth, Dimmu Borgir with a dash of Gorgoroth; it’s a great mix. The Midian era keyboards and synths help to add an element of creepiness and the guitar harmonies during “Eye of the Clocktower” are especially great.  What becomes immediately apparent is Vesperian Sorrow’s ability both in the technical realm and in their understanding of extreme metal genres; they know how to expertly switch from a full on cvlt black metal attack to a neoclassical death metal sound only to stop at a folk metal interlude; more importantly though, they know when not to include them. It’s not easily done, but they successfully pull it off several times over in Stormwinds of Ages making several great tracks in the process with “Casting Dawn Into Shadows” being amongst the best.

However, for all the righteousness that Vesperian Sorrow bestows upon us, it also does sin. The album drags on at times; some tracks in the middle of the album feel like re-hashed versions of the previous song and it becomes quite a concern when you think you’ve already listened the song. The effect of this is two-fold; firstly, not only does the song come in as a sub-par entry on a solid album but, because Stormwinds of Ages is without a doubt one of those albums that must be listened to as a whole, it suffers when the other tracks bring it down; think of it as a relay race instead of a mad dash for the finish.

Epicness for the sake of being epic is simply hindrance wrapped up in a pretty bow. Sadly, while the album presents many strong songs expertly written and masterfully carried out, it also becomes a victim of its own vanity; letting things linger just because they like it. I can see that Vesperian Sorrow wanted to present a full soundscape to the apocalypse and while, I can respect that I just can’t say it was one hundred percent successful. After all, the epic of Gilgamesh was written on only 12 tablets.[signoff predefined=”Signoff 1″][/signoff]