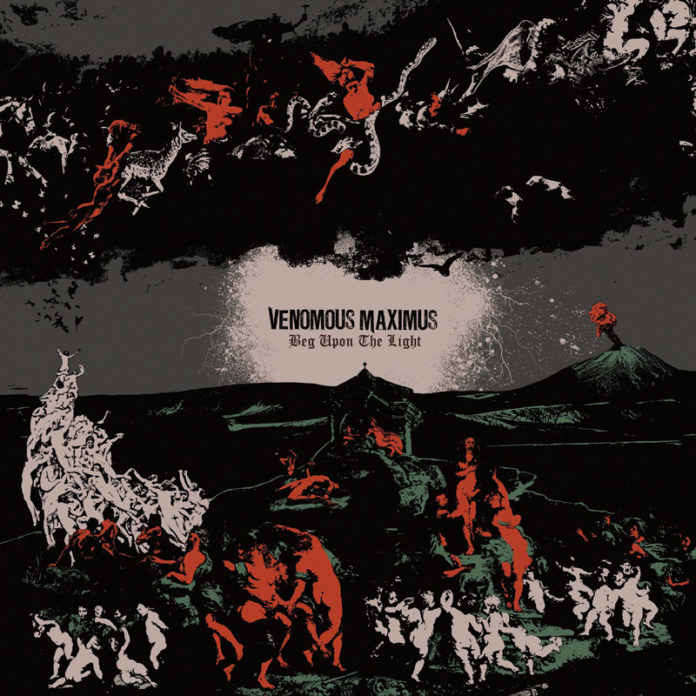 Having an exceptional frontman behind the mic can elevate your band to something really special. As undisputably phenomenal as Iron Maiden and Judas Priest are, it’s a known fact that Dickinson and Halford have had more than a little to do with their global success. And what would the Stooges be without Iggy, or the Murder Junkies without GG Allin? A talented and charismatic lead singer can make all the difference, and when you don’t have one that’s either of the two the final product starts to suffer. Case in point, Venomous Maximus.

This is the band’s first full-length release, Beg Upon The Light, and it has been one of the hardest albums in recent memory for me to review. The band does almost everything right – the production is solid, lending the music plenty of weight, and the songwriting is definitely a level above competent. There are riffs that will get your blood and fists pumping, and there’s a pacing to the album that one would usually only expect from a band who’s done this full-length album thing at least once or twice before. The only problem with this record is the voice that carries it, and this problem is an enormous one.

Gregg Higgins, the vocalist and guitar player of Venomous Maximus, can’t sing. At all. This wouldn’t be a problem if they played a more extreme style of metal, where his (very good) raspy growls could easily front the songs and he wouldn’t have to worry about carrying a tune. But instead, the band goes for more of a throwback style of classic occultist doom in the vein of Hour of 13 or In Solitude. Those bands, however, have lead singers that can comfortably front a band that relies on melody. Higgins’ tuneless and tired-sounding vocals don’t have any hope of helping the songs push through to the stratosphere; instead, his voice weighs them down like a bouquet of sandbags. To give you an idea of what I mean, consider their track “Battle For The Cross.” This starts out just like any killer metal anthem should, with a memorable riff and a driving beat. It’s easily the high point of the album – that is, until Higgins opens his mouth. The hook of the chorus, where the riffs stop and the singer shouts out the song’s title, should be an anthemic call to arms, like in “Number of the Beast” or “Ace of Spades!” But as it is, Higgins’ slurred and apathetic delivery (“Baddafuhduhcross!”) reminds me of Doug Ingle of Iron Butterfly slurring his way through “In-A-Gadda-Da-Vida.” Actually, that’s not entirely accurate; Ingle could still carry a tune.

The more I listen to Beg Upon The Light, the more Higgins’ vocals remind me of Lou Reed. And let me be clear for a moment: I really love the Velvet Underground, and Transformer is one of my favorite albums of all time. I’ll even defend Metal Machine Music to the death when the chips come down. But Lou Reed’s vocals do not belong anywhere near the world of heavy metal. Not after the last time. And I don’t know about you, but I’m still not ready to talk about that. Sometimes I think I’ve finally moved past it, but I woke up in a cold sweat last night with proclamations of tabledom echoing in my ears. It hasn’t even been two years since the release of that bloated and monstrous abortion of sound; you’d think most bands would be trying as hard as they could to sound as little like it as humanly possible. Wouldn’t they?

Albums like Beg Upon The Light are why I hate having to give numerical scores to the albums I review. There’s a really killer set of riffs here that deserve a far better voice fronting them. There’s a well-done album here, so long as it’s just the instrumental tracks. If a competent singer was behind the mic, you’d be looking at an easy 3.5, maybe even a 4. But I can’t feel comfortable giving this a decent grade, even with all the talent that’s on display from the rest of the band. Even if you bake your cake with the finest flour, richest milk, and biggest grade A cage-free eggs, it won’t make a bit of difference if you use dog shit instead of chocolate frosting.