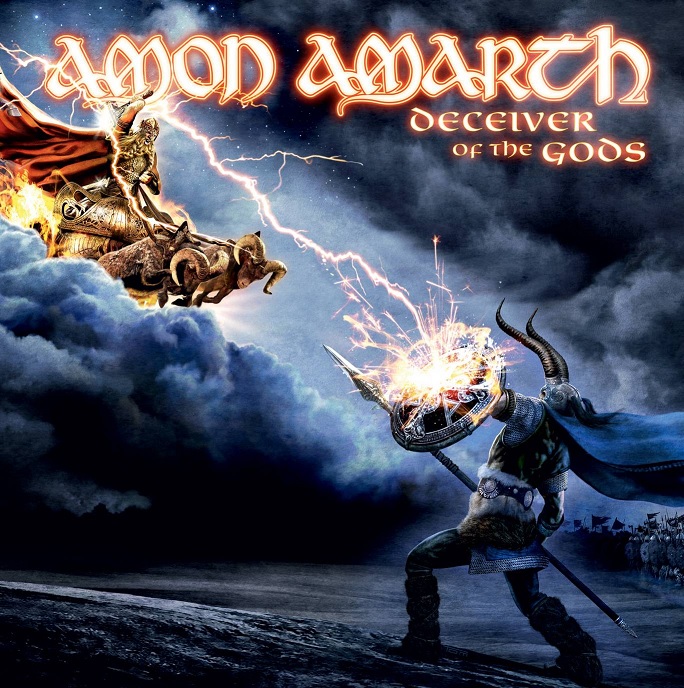 For more than two decades, AMON AMARTH has carved a name for itself in the annals of Death Metal as a band that, rather than taking prisoners, prefers to annihilate everything in its path. While that was more than true in the first 10 to 15 years of its career, the band’s recent outputs have strayed from the original bloody path towards a much wider and more melodic road, all while establishing a subtle approach to its familiar Viking Metal sound.

“With Oden On Our Side” from 2006 was the first step in that new direction, though after the initial shock, the album was accepted as something fresh and exciting – backed up not only by a strong concept about the father of all Norse gods, Odin, but also by the stellar production of Jens Bogren from the Örebro, Sweden based Fascination Street Studios. Riding on the same successful formula, the band spawned two successors – “Twilight Of The Thunder God” (2008) and “Surtur Rising” (2011) – which might have produced some awesome hits, but to me, they felt as if the band was stuck at the same place.

Luckily the gods have heard my prayers and accepted my sacrifices, because the Swedes have finally decided to invade England and visit none other than Andy Sneap, who produced some of the genre’s finest pieces. Question is, did Andy manage to work his charm on AMON AMARTH‘s ninth release or did he set “Deceiver Of The Gods” to be the band’s last battle? Honestly, even after first listening to the earlier release of the title track, I wasn’t completely sure. It consists of the band’s finest trademarks – great melodic riffs, powerful vocal lines by Johan Hegg and a chorus which could lift up a whole army of warriors – yet, it sounds too familiar.

The second track, “As Loke Falls”, starts with a strong mesmerizing riff and a very rough approach – all delivered with a crisp sound.  Fredrik Andersson hits hard on the drums, switching between blast-beats and more methodical blows, all while the distortion and bass are kept at a distance. It’s sure to say that Andy made his mark on this album, but instead of going “back to the roots”, like I thought he would, he actually gave this release the most sterilized sound the band has ever had; it sounds amazing, especially the melodic riffs, but then again, you won’t find any raw moments or harsh distorted guitars, which is a bit disappointing.

Another change you’ll find in this album comes with a new batch of influences, mainly from the Heavy Metal world. For example, “Father Of The Wolf” sounds like a JUDAS PRIEST track on steroids. It works great and, no doubt, will kill in a live situation, but it feels kind of awkward to hear Johans’ voice on top of it. Add to that an amazing solo, and you’ll get a song which would even make SABATON wet their panties. “We Shall Destroy” reminds me a lot of METALLICA, though the drumming makes a huge difference (which is not such a hard task considering Lars can’t play, but you know what I mean). Johan gives his lowest vocals and guides us to battle, but then, out of nowhere comes a big groovy break (!!!), with words that would send you to fight till death in the name of Odin. I’ll eat my Sword off if this song doesn’t become the band’s newest anthem!

If you haven’t paid attention, the album focus is on Loki, god of mischief and future enemy of Asgard. So, after dealing with Odin, Thor and even with the fire giant Surtur, it’s about time the “Shape Sifter” gets some attention. The song itself is fast and in the veins of what we used to hear from AMON AMARTH‘s latest releases, but at least Ted Lundström gets to shine on his bass. “Under Siege” and “Blood Eagle” continue to deliver some great Death Metal moments, each with his own unique touch. “Hel”, on the other hand, is something completely different. It starts very slow, almost boring, but when some eerie female voices start to flow in the background, you get this very cool ethnic atmosphere. Just as you settle in, Messiah Marcolin of legendary doomsters CANDLEMASS pops in with his powerful clean vocals, to back up Johan in the most epic of ways.

“Coming Of The Tide” at number nine, sounds like what ARCH ENEMY should have been doing if they weren’t pushing towards mainstream pop – very strong, yet melodic enough, but not so cheesy. Finally, if song titles such as “Avenger” and “Victorious March” tell you anything, then you’re in for a treat with “Warriors Of The North”, spanning over 8 minutes (a new record for the band?). Here you’ll find most elements from the previous songs, wrapped in an epic feeling only AMON AMARTH can provide. Olavi Mikkonen and Johan Söderberg deserve a lot of praises for their guitar work here and throughout the album, and so does Andy, for bringing just the right amount of spirit to clear the band’s path.

Much like the Norse gods and their Ragnarök, AMON AMARTH approached its own musical twilight, but with “Deceiver Of The Gods” they have not only showed their superb musical craftsmanship, but also that they’re still capable of pushing new boundaries. It might not be the bloodiest battle the band has fought, but it sure is worth the effort. Valhalla awaits!