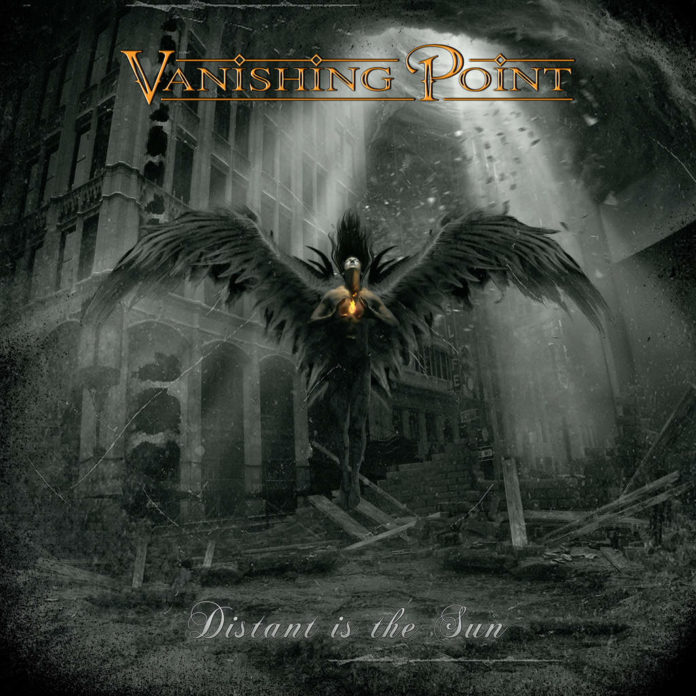 Vanishing Point are a long-standing name from the Land Down Under, formed in the early 90’s in Melbourne. Over the years, and over the course of four – now five – albums, they have gone through numerous line-up and objective changes. A strong symphonic metal band, Vanishing Point have quite a history behind them and it looks like they are finally pressing forward once again. Their earlier years were marked with success on both the local and the international scale, having done numerous tours and opening for greats such as Yngwie Malmsteen and Iron Maiden. Pushing back into the scene with their first full length album in seven years, Vanishing Point are ready to show off Distant is the Sun.

All in all, this is a very enjoyable album. It’s fun, heavy, melodic, and interesting. It manages quite successfully to bring out the lightness and beauty of a symphonic sound without sacrificing any of the heaviness that a listener might desire. It comes complete with powerful and pleasing guitar riffs and singer Silvio Massaro’s vocals are just spot-on.

Distant is the Sun displays wonderful cohesion and composition. It opens darkly yet powerfully with “Beyond Redemption”, allowing the band to set up strongly for the remainder of the album right from the first track. The listeners are given a hint of what is to come while still possessing the intrigue of wondering what all the album has in store for them. They certainly don’t have to wonder long though, because as soon as the short introduction is complete, Vanishing Point waste no time pounding forward into the grandiose “King of Empty Promises”. It’s a strong and almost regal track, swelling up the symphonic melodies and blending them seamlessly with the guitar and drums.

A personal favorite of mine has to be “Circle of Fire”. It is certainly a killer track and isn’t one to be dismissed. It begins slowly and beautifully with an eloquent piano introduction before surging into a deep, meaty, and rich melody, complete with heavy drums, bass, and a guitar/symphony mixture. And don’t even get me started on the wonderful vocals. The track as a whole is a lofty, but deep and tangible, song that really utilizes all the best the band has to offer. It’s catchy and will leave you singing and air-drumming to your heart’s content (although, frankly, you’ll probably be tempted to air-drum for a lot of the album!).

For ultimately satisfying vocals, however, you must listen to “Let the River Run”; it really allows Silvio’s cords to shine. It is certainly a slower song, compared to the rest of the album, but it’s very heartfelt and powerful, and it doesn’t skimp on the rest of the band simply because it is a slower track. Plenty of other tracks accent this same slow yet powerful quality, such as “Story of Misery” and “Handful of Hope” (this one being another personal favorite of mine). These slower and more profound songs really are a fantastic exhibition of Vanishing Point’s prowess and their ability to manipulate and maneuver all the pieces of a track into a full and commanding ballad.

The album closes just as beautifully as it began with “April”, a lovely instrumental piece that is lighter than the opening “Beyond Redemption”, but just as elegant, and it is an excellent way to end the album. One of the biggest benefits of Distant is the Sun, as I’ve already mentioned, is the feeling of cohesion that permeates throughout it. The songs all feel like they are in exactly the right order and the album flows almost effortlessly. Each song is distinct in its own way, while still feeling like a unified part of the whole. I had to resist simply going track by track and listing all the things I liked about each one, but if I had done that, this review would have been much too long by the time I was finished. The only downside I’ve managed to find is that some listeners might find a few of the songs a bit repetitive, however listeners who tend to prefer symphonic metal will be able to really pick apart all the details and nuances this album has to offer. Distant is the Sun is certainly worth your time, so give it a shot.