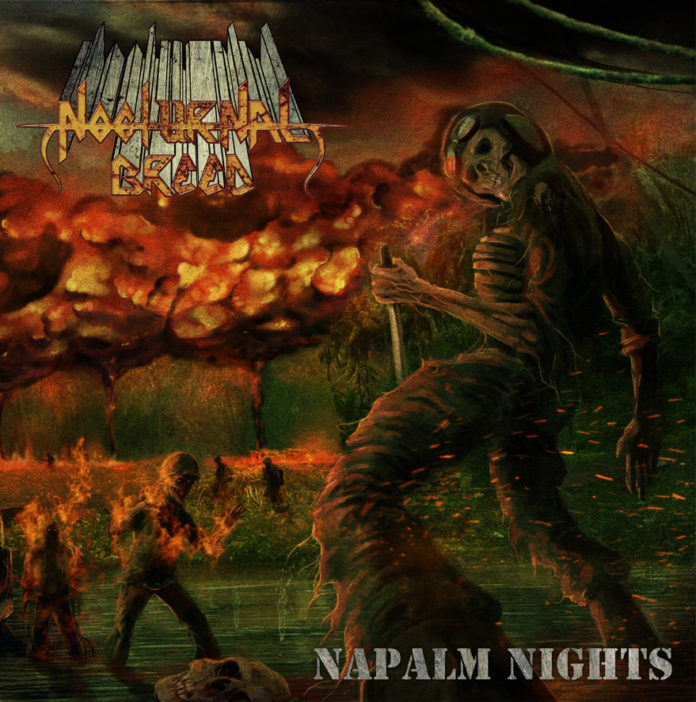 Nocturnal Breed‘s 2007 album, Fields of Rot, was a great album. Sitting closer to early Sodom than anything else, it had a punky edge that made it a disc of fun, thrashing mayhem. It’s been seven years and I was anxious to hear what the band, including new additions Axeman I. Maztor (a returning member who hasn’t recorded with the band since 2000’s Tools of the Trade) and V. Fineideath, could conjure for us this time out.

Napalm Nights is a decidedly more blackened affair than its predecessor. This isn’t necessarily a bad thing from an artistic perspective: there are definitely some stand-out moments here, “Cursed Beyond Recognition” being of particular note for its dark and almost doomy feel and “Bitch of Buchenwald” being a Motörhead-thrasher with guest backing vocals from Nocturno Culto. In total, while Napalm Nights is still pit-fueling thrash (see “Thrashiac”), it’s being pulled in several directions and takes in more diverse influences than Fields of Rot did.

The band has definitely retained their sense of riff over these past years, as they are able to keep even fairly standard thrash from becoming boring. They achieve this via a remarkable ear for rhythm which allows them to take a song like the NWOBHM-tinged “Under the Whip”, with it’s simplisitic primary riff, and apply the vocals in such a way that really lends itself as a lead instrument. AC/DC were pioneers of this in the ’70s and, when a band can apply the technique with skill and gusto, it still has the power to impress.

Everything is just as raw as you want it to be: not so grinding as to make the listener reel from discomfort, not so smooth as to be compared to dreaded non-thrash, heavier-than-thou metalcore contenders. Think Kreator‘s “Coma of Souls” and you’ll have an idea of the sonic qualities of this release.

“Napalm Nights” surpasses the already excellent Fields of Rot in almost every way. It’s more varied, the vocal work is better, the riffs are catchier, and while it does trade up some of it’s wicked, vicious and violent tenacity, it comes out with an infinitely more absorbing product. I know it’s only march, but let’s just go ahead and call this an early contender for thrash album of the year.[signoff predefined=”Signoff 1″][/signoff]