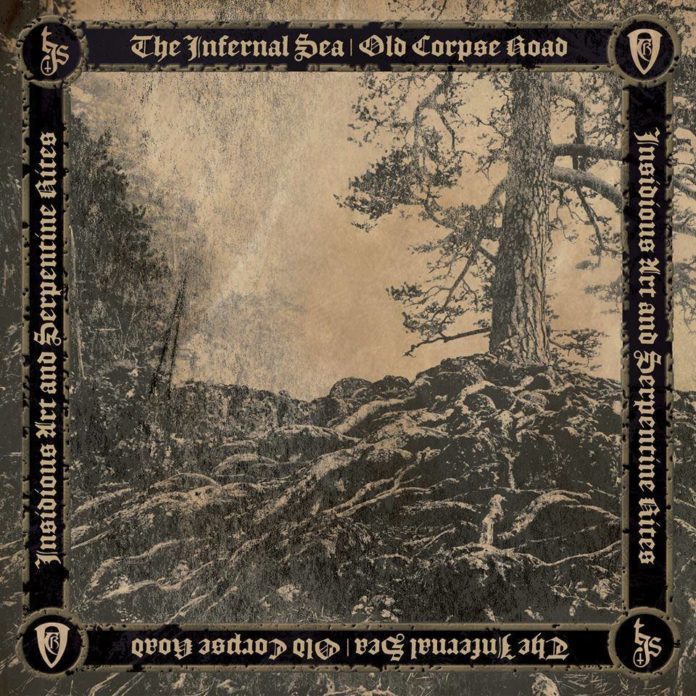 The Infernal Sea open with the cacophonous “Tannis Root,” a very moody piece that starts off with the obligatory nature sounds you typically hear on black metal releases. This all gives way to a chorus of shrieks and growls that float in like some kind of nightmare, then fading into one viciously brutal guitar riff. I’m reminded very strongly of Gorgoroth, particularly their work in Ad Majorem Sathanas Gloriam, even if The Infernal Sea are a little more melodic at times.

Although Old Corpse Road were given the difficult task of following that blistering opening act, they show that they’re more than up for the challenge with their own tune, “The Sockburn Worm.” Right of the bat, you’re sent flying head first into a storm of blast beats, lighting fast guitars, and shrieked vocals, with some synths reminiscent of Emperor. Where The Infernal Sea go for a more raw and heavy approach, Old Corpse Road go for an epic and more bombastic form of black metal, very orchestral in its execution. The vocals are all over the map, from deep guttural death growls and ear-splitting shrieks to choruses of clean vocals and lengthy spoken word passages. Old Corpse Road are true storytellers, and create an atmosphere that feels like you’re watching a battle in some cinema period piece.

This split release is a must have for any black metal fan that loves the Norwegian originators Gorgoroth and Emperor, as The Infernal Sea and Old Corpse Road sound, respectively, quite similar to them. That’s not to say that they’re copying them, as both bands are certainly carving their own niche, and deserve to have their entire back catalogues listened to.