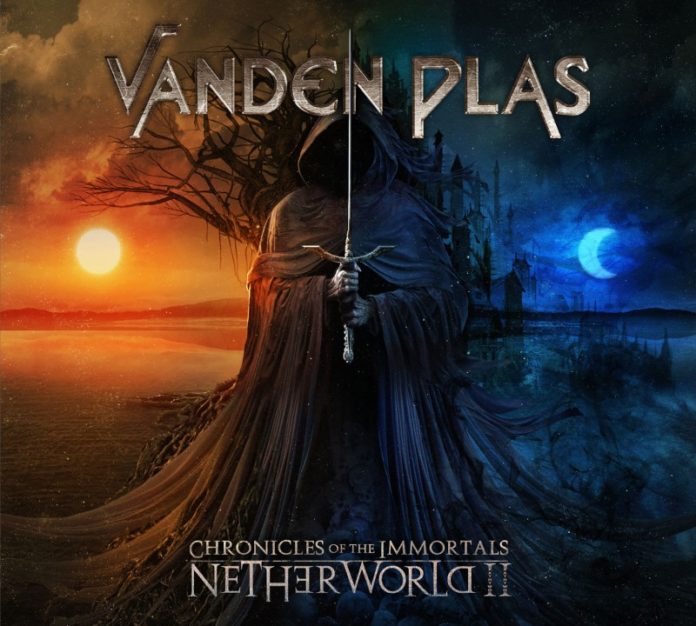 Continuing on from 2014’s Chronicles of the Immortals: Netherworld I, this German quintet decided to forget about brevity and continue following the adventures of their immortal protagonist in this second installment of Chronicles. Co-created with novelist Wolfgang Hohlbein, the album and its story are nigh-inseparable, with titles like “VISION 12elve: Godmaker’s Temptation” and “VISION 16teen: Diabolica Comedia” to clue you in to the power-prog details of the narrative struggle before you even get to the passionate wailing.

While it’s not quite in the territory of symphonic fantasy metal like Rhapsody of Fire or Dragonland, the core spirit isn’t too far removed from those sorts of cheesy theatrics and exaggerated melody bridges. The main push of the music seems to be aiming towards prog, but for an album all about a guy giving up immortality and facing demonic opposition in the underworld (spoilers, I guess), it’s not as over-the-top as you’d expect. From one angle, that restraint is welcome (there’s no shortage of over-florid fantasy metal), but from another it raises the question ‘why not go all-out with the falsetto and sweep-picking after committing to such an operatic premise?’.

And it’s a bit of a shame that the balance is so unstable, because the songs are put together well on their own and in succession. The times in which the vocals drop out deliver so much more punch, thanks to the band not having to worry about the story-line and getting to bash out instead, that the sung sections almost feel like punishment after a while. And that’s when they break out the power ballad.

That’s what makes it hardest to enjoy the album, in spite of the care that’s clearly been put into its creation. While the instrumental side of things, taken on its own, is quick and fresh and modern in its execution, the songwriting just can’t bring itself to let go of traditions that have had the last of their vitality drained out of them over the past couple of decades. The band often comes so close to doing something new, only to slam right back into the usual behavioral patterns of the genre. If you’ve got an insatiable lust for fantasy metal with prog inclinations, go right ahead and enjoy; otherwise, this may not be for you.

IN A NUTSHELL
It's a fantasy metal concept album sequel. That should give you a fair idea of whether you'll like it.
POSITIVES
Respectable instrumental techniques, seemingly heart-felt performances
NEGATIVES
A melodramatic epic fantasy concept album, cliché lyrics, more than a little wanky
4