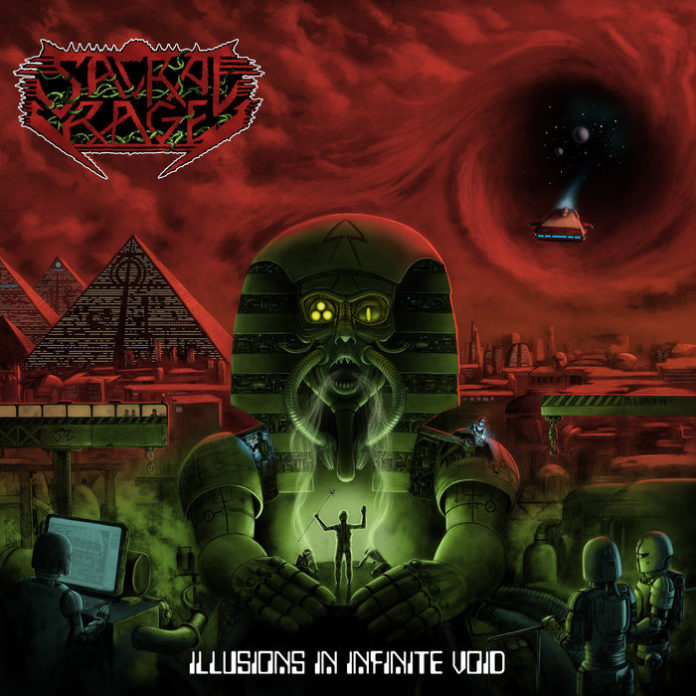 Wearing your influences upon your sleeve can be perceived in a negative light when they are followed so closely that the work appears as nothing more than a cheap imitation. Sacral Rage have avoided this, as they both honour and learn from the efforts of their predecessors, while still implementing their own unique style that keeps their sound fresh and interesting.

The most obvious source of inspiration in this record is to be found in the likes of early Annihilator. The whole album falls perfectly in step with the tempo of Never, Neverland, with guitars that come storming in at terminal velocity, percussion that never rests upon a consistent beat, and a sinister bass line lurking in the rafters. There are even some melodic, almost hollow-sounding guitar riffs that simply reek of Jeff Waters (in a good way). The vocals exist mostly as a high pitched shriek that, unfortunately, lacks substance and possesses a light, airy quality. When the singer isn’t attempting to rocket through the ceiling, the vocals find themselves at a mid-range chant that manages to keep pace with the unpredictable speed of the instrumental.

A particular standout track is “Into Mental East,” which begins with spoken word that has a feel of Star Trek dialogue about it. The track is an instrumental turning point for the album, adding progressive elements to the pre-existing thrash. It is like a sped up version of Opeth’s Orchid, with far forward bass lines and a concise percussion, yet also all over the map. The additional flavours only work in the band’s favour, as they prevent the sound from becoming stagnated and create a feeling of direction and movement in the album.